Business operators in Western Visayas and the officials of the town which has jurisdiction over Boracay have asked the government to consider using the cheaper and faster COVID-19 saliva test for tourists to help hasten the recovery of the resort island in Aklan province.

In a letter to officials of the Boracay Inter-Agency Task Force (BIATF), the regional governor and presidents of seven chapters of the Philippine Chamber of Commerce and Industry (PCCI) also sought the national government’s support for the installation of a molecular laboratory in Boracay or in Barangay Caticlan on the Aklan mainland of Malay town.

“This will ensure the timely and accurate [COVID-19] testing for both tourists and other stakeholders alike, thus promoting a safer, healthier and better environment that would further boost and fast-track the economic recovery of the island,” they said.

The business leaders noted that the saliva reverse transcription-polymerase chain reaction (RT-PCR) test had already been approved for use by the Department of Health on Jan. 21.

In a joint resolution, the Malay Inter-Agency Task Force on COVID-19 and the municipal incident management team also asked the BIATF to approve the use of the saliva test, provided that results would be released by Philippine Red Cross (PRC).

The saliva test is considered less invasive than the nasopharyngeal swab because it does not require the insertion of a sterile swab into the nostril and nasopharynx (upper part of the throat). It is at least 50-percent cheaper than the RT-PCR swab test, which costs from P2,800 to P5,000.

Results are released faster, or from three to four hours, compared to the 12 to 24 hours for swab testing. PRC earlier announced that the accuracy of saliva testing is 98.23 percent, almost similar to the 99-percent accuracy of the RT-PCR swab test. 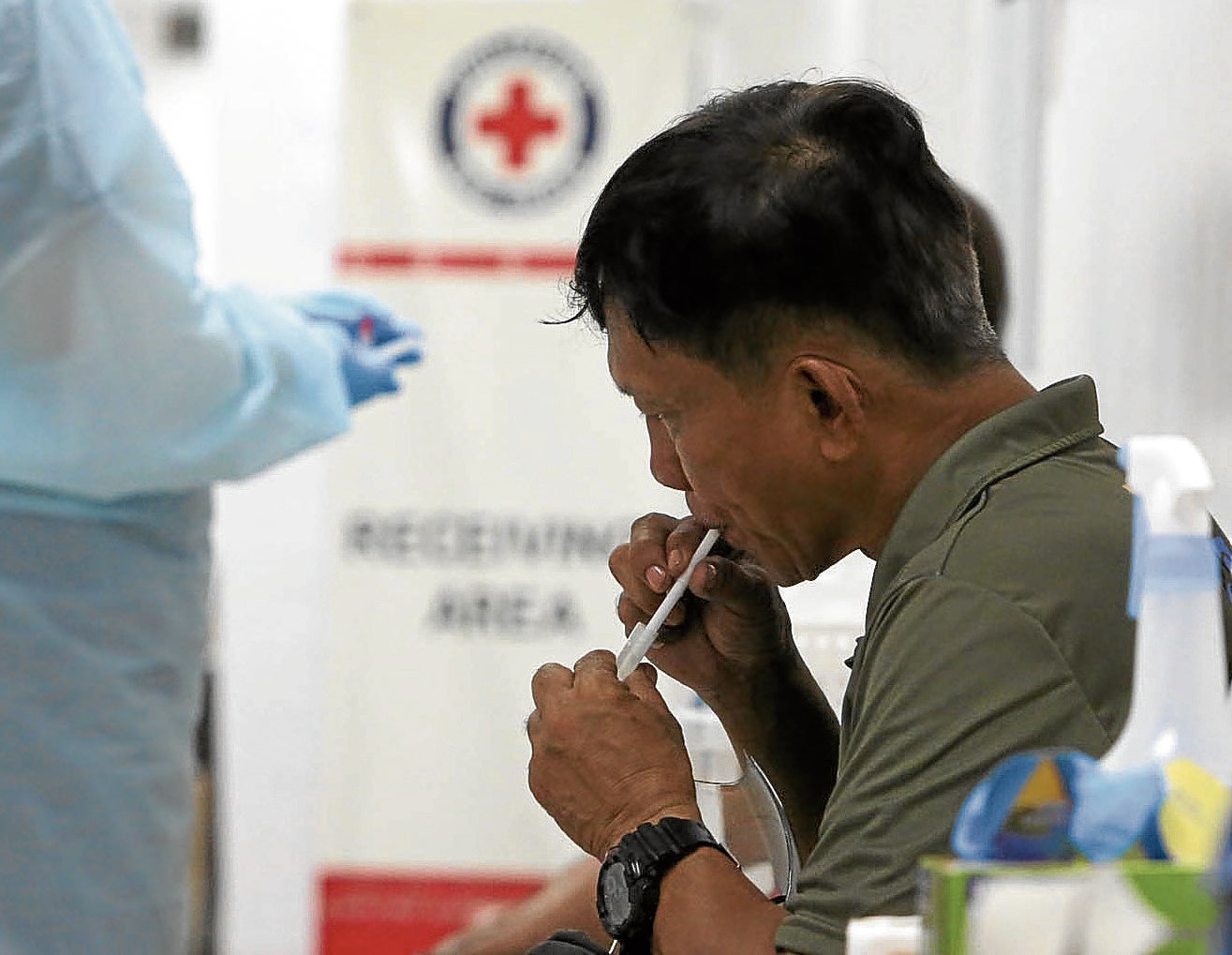 CHEAPER AND FASTER A man spits in a small container using a straw so his saliva can be collected and tested for the virus causing COVID-19. The cheaper and faster test is administered by Philippine Red Cross. —MARIANNE BERMUDEZ

The business leaders said a successful implementation of saliva RT-PCR testing in Boracay would be a “boost to its recovery efforts [and] serve as a template for all our major tourist destinations in the Philippines.”

The island’s recovery will also benefit the entire Western Visayas “as its other cities and provinces also supply both labor and materials to the island,” according to their letter.

Tourists bound for Boracay are required to provide a negative RT-PCR test result within 72 hours before their trip to the island.

Authorities have apprehended at least 100 tourists who submitted falsified test results since December last year. Three of them turned out to be positive for the new coronavirus.

Criminal complaints have been filed against those who submitted falsified test results.

In Ilocos Norte, the provincial government this week relaxed its health protocols for tourists, but officials said visitors would still be required to present a negative COVID-19 test result before being allowed entry.

In a statement, Gov. Matthew Marcos-Manotoc said the province was not keen on following the move of Cebu province, which stopped requiring visitors to submit a negative RT-PCR test result.

Manotoc, who described the decision of Cebu as “bold,” said Ilocos Norte would only drop the antigen test requirement for visitors if they could present a negative RT-PCR testing taken within 60 hours before arrival.

“Testing tourists before they enter or travel to the province is still an effective safety net, especially since we are still far from the vaccine rollout,” said Aianree Raquel, provincial tourism officer.

Ilocos Norte’s tourism industry, which gradually opened in September 2020, had recorded at least 3 million daytime visitors before the pandemic. —WITH A REPORT FROM JOHN MICHAEL MUGAS