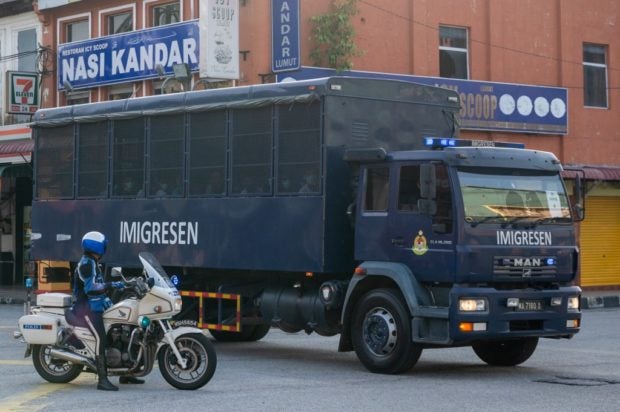 An immigration truck carrying Myanmar migrants from Malaysia back to their homeland, is seen heading towards the Naval base in Lumut, outside Kuala Lumpur on February 23, 2021. Photo by Mohd RASFAN / AFP

LUMUT, Malaysia — Malaysia on Tuesday deported more than 1,000 Myanmar detainees back to their strife-torn homeland just weeks after a coup, despite a court order halting the repatriation and a storm of criticism.

The migrants, whom activists say include vulnerable asylum seekers, departed on three Myanmar navy ships from a Malaysian military base after arriving on packed trucks and buses under police escort.

The United States, the United Nations and rights groups had criticized the plan, while hours before the deportation a Kuala Lumpur court ordered it be temporarily halted to allow a legal challenge.

Activists were set to argue it should not go ahead as Malaysia would breach its international duties by deporting vulnerable people, and the Myanmar military’s seizure of power put them at even greater risk.

But the vessels later set sail carrying 1,086 detainees, with authorities giving no explanation as to why the court order had been ignored.

Amnesty International, one of the groups that had brought the legal challenge, said pushing ahead with the repatriation in defiance of the ruling was “inhumane and devastating”.

“This life-threatening decision has affected the lives of more than 1,000 people and their families, and leaves an indelible stain on Malaysia’s human rights record,” said Katrina Jorene Maliamauv, executive director of the group’s Malaysian office.

Phil Robertson, deputy Asia director for Human Rights Watch, said Malaysia had “sent them back into the hands of a military junta known for persecuting those who flee the country for political reasons”.

Malaysian immigration chief Khairul Dzaimee Daud had offered assurances no members of the persecuted Rohingya minority — not recognized as citizens in Myanmar — or asylum seekers had been repatriated.

“All of those who have been deported agreed to return of their own free will, without being forced,” he said.

Rights groups have however raised doubts over authorities’ claims no asylum seekers were among those sent back, as the UN has not been able to do a proper assessment.

Authorities earlier said 1,200 detainees were to be deported, and it was not clear why the final number was lower.

Officials insist those sent back had committed offenses such as overstaying their visas, and the deportation was part of their regular program of repatriating migrants from poorer parts of Asia.

About 37,000 foreigners were repatriated last year. Malaysia is home to millions of migrants who work in low-paying jobs such as construction.

It is rare for rights groups to launch legal challenges against deportations.

But they were prompted to do so by concerns about the worsening human rights situation in Myanmar since the coup, and that some of the migrants were vulnerable.

Activists have been growing increasingly alarmed since authorities blocked the UN refugee agency from accessing immigration detention centers in Malaysia in 2019.

This means the UN cannot assess whether foreigners are economic migrants looking for work or asylum seekers fleeing persecution and conflict, who would usually be granted refugee status and the right to remain in Malaysia.

In the latest case, the detainees were believed to include members of the Christian Chin minority and people from conflict-riven Kachin and Shan states, according to Lilianne Fan, international director of the Geutanyoe Foundation, which works with refugees.

Since seizing power at the start of February, authorities in mostly Buddhist Myanmar have gradually ratcheted up their use of force, with three anti-coup protesters killed in demonstrations so far.

Malaysia initially expressed “serious concern” at the coup, but just days later news emerged it had accepted an offer from the Myanmar junta to send warships to repatriate the detainees.