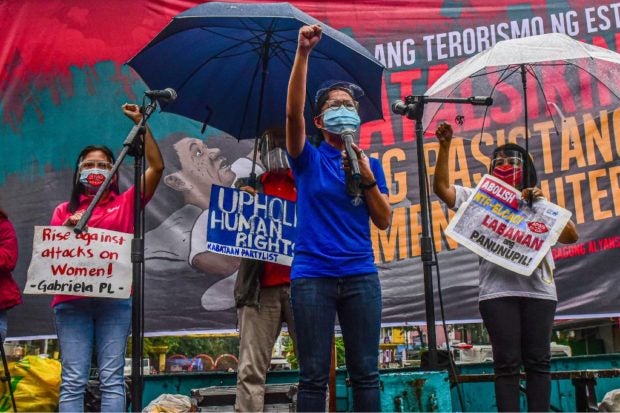 This photo taken on December 10, 2020 shows Sarah Elago (C), a Philippine legislator and outspoken critic of President Rodrigo Duterte, raising a clenched fist as she delivers a speech to commemorate International Human Rights Day, near the presidential palace in Manila. A torrent of misinformation on the social media platform has put activists, journalists, politicians and lawyers in the firing line as President Rodrigo Duterte’s government and military out alleged supporters of a decades-old Maoist insurgency. Photo by maria Tan / AFP

MANILA , Philippines — Representative Sarah Elago faces a daily barrage of Facebook posts linking her to communist rebels trying to overthrow the government. She says the claims are false, but they could get her killed anyway.

A torrent of misinformation on the social media platform has put activists, journalists, politicians and lawyers in the firing line as President Rodrigo Duterte’s government and military out alleged supporters of a decades-old Maoist insurgency.

Facebook’s reach into the smartphones used by millions of Filipinos has made it a powerful weapon in amplifying the accusations — known locally as “red-tagging” — which critics say are part of a broader effort to silence dissent.

“Red-tagging is like an order to kill,” said Elago, a representative of the Kabataan party-list group and an outspoken Duterte critic who watches her back in public for fear of being physically attacked.

In the past year her name has appeared in more than 14,000 public posts on Facebook that also mention the New People’s Army (NPA), the armed wing of the communist party, according to data from social media monitoring platform CrowdTangle.

AFP’s Fact Check team has debunked many of them, including one post on a pro-government page called “Duterte Fact News”, which has more than 34,000 followers.

The post shows Elago in a police mugshot holding a charge card that accuses her of recruiting rebel fighters. AFP found the photo had been manipulated.

It was shared hundreds of times and drew comments calling for Elago to be killed or raped.

The most viral posts targeting Elago, generating tens of thousands of shares, were on the official page of Duterte’s National Task Force to End Local Communist Armed Conflict.

Hundreds of others have been posted on Facebook pages claiming to be the official accounts of police stations across the country.

Red-tagging is not new in the Philippines. But rights groups say it has intensified under Duterte, whose brutal drug war and controversial anti-terrorism law have sown fear.

Hundreds of activists, journalists and lawyers have been killed since he was swept to power in 2016. Many died after being red-tagged, rights groups say.

“It is pretty much open season for anybody who criticizes the government, the military or the policies,” said Carlos Conde of Human Rights Watch.

While many of the red-tagged activist groups have ideological links with the communists, they were not involved in the armed struggle, Conde said.

But authorities claim they are acting as “legal fronts” for the rebels, funneling money and new recruits to the battlefield.

“There must be public awareness of these people who are trying to bring down the government,” said National Security Adviser Hermogenes Esperon.

Asked why authorities don’t take suspected sympathizers to court if they have evidence of illegal activity, Esperon told AFP: “There’s an easy solution to that. Why don’t they condemn the NPA.”

For Duterte, a self-described socialist, the anti-communist campaign is an about-face from the start of his term when he sought a peace deal with the rebels.

Since talks collapsed in 2017, he has branded the Communist Party of the Philippines and the NPA “terrorist organizations” and ordered soldiers to shoot female insurgents in the genitals.

Everyone is fair game.

A general recently warned actress Liza Soberano she could end up dead if she did not sever ties with a women’s rights group accused of having links with the guerilla movement. It sparked a public outcry and led to a Senate inquiry into red-tagging.

“Being branded a communist isn’t just mere labelling or shaming — it literally means arrest, detention or even death,” said Luz Rimban of the Asian Center for Journalism at Ateneo de Manila University.

Cristina Palabay, head of rights group Karapatan, says she fears for her life after 13 of the watchdog’s members were killed under Duterte.

The most recent victim was Zara Alvarez, who was “heavily red-tagged” before she was gunned down in August.

Palabay said she no longer sleeps in the same location on consecutive nights, avoids shopping malls and even stopped visiting her parents after receiving anonymous death threats.

“Frankly speaking, I fear that I’ll be killed that way,” Palabay said.

Only occasionally do authorities admit they got it wrong.

The page had published an erroneous list of ex-university students it said were killed or captured after joining the NPA.

Filipinos are among the world’s heaviest users of social media, and the country has become a key battleground for fake news.

Most of the country’s 73 million internet users have Facebook accounts, according to Britain-based media consultancy We Are Social.

Nearly all of them access the site on their mobile phones, where Facebook offers free access to a limited version of its platform and other selected websites.

That has turned the social media giant into the de facto internet provider for many users.

Given its influence, Facebook should be “more proactive” when it comes to stopping the spread of disinformation, said Ellen Tordesillas of fact-checking group Vera Files.

The platform has cracked down on suspicious Philippine accounts several times since 2018, when it stepped up an offensive against misinformation.

Last year it took down a network linked to state security forces it accused of “coordinated inauthentic behavior”.

Asked about its policy on red-tagging, Facebook told AFP it removes content that “exposes the identity of someone who is alleged to be a member of an ‘at-risk’ group, where these allegations could lead to real life harm”.

It would not say on the record if the NPA or communist party were considered “at-risk” groups.

Posts targeting Elago that “violated our community standards” had been taken down, a spokesperson said.

Elago says no one has been held responsible for the threats against her, despite complaints to the police, military, human rights commission and Facebook.

But she refuses to be silenced.

“Red-tagging needs to be called out,” she said.