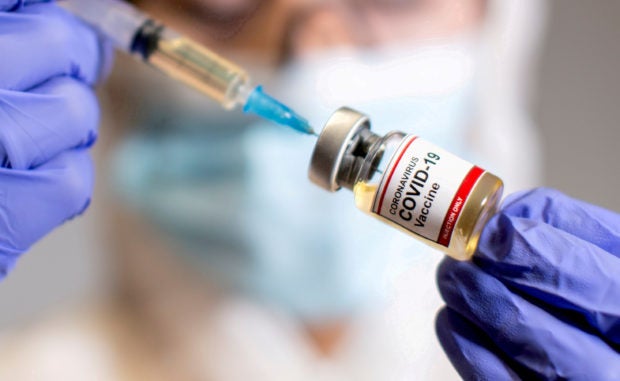 FILE PHOTO: A woman holds a small bottle labelled with a “Coronavirus COVID-19 Vaccine” sticker and a medical syringe in this illustration taken October 30, 2020. REUTERS/Dado Ruvic

MANILA, Philippines — While other countries have begun inoculating their citizens against the coronavirus disease, the people of the Philippines are still waiting at the sidelines for the first doses of the vaccine from various drug manufacturers to arrive.

The government, through the Philippine Food and Drug Administration (FDA), has so far given its emergency use authorization (EUA) to three COVID-19 vaccine developers — the United States’ Pfizer-BioNTech, United Kingdom’s AstraZeneca-Oxford University, and most recently China’s Sinovac.

The EUAs were granted to speed up the process of receiving doses of vaccines even as these medicines have not been globally approved for commercial use. In the local setting, the EUAs will help push forward the country’s inoculation drive, which has been held back by a series of delays and the limited supply of vaccines.

Vaccine czar Carlito Galvez Jr., also the lead of the National Task Force against COVID-19, has been busy of late fending off brickbats for the delay in the arrival of the vaccines, on which hinged a number of things — jumpstarting the slumped economy, shift to the less restrictive modified general community quarantine,  and the reopening of in-person school classes, to name a few.

Amid all these, the country has yet to receive a single dose of vaccine, that even President Rodrigo Duterte has been said to have expressed his impatience over the delays.

“More than 100,000 Pfizer/BioNTech doses have also been allotted to the Philippines through the COVAX initiative,” said Katharina Buchholz, a data journalist for Statista, analysis by market and data consumer company.

“But these can only be delivered after the Philippines have enacted a framework for compensating those who might potentially suffer from side effects of the vaccine. The mandatory condition that will absolve Pfizer of direct responsibility highlights the bureaucratic hurdles of receiving some coronavirus vaccines,” she added.

In numbers: Vaccination drive in other Asian nations

Based on the Feb. 23 data compiled by the Our World in Data project at the University of Oxford, over 700 million vaccine doses have already been administered in Asia.

Data showed that Israel has been vaccinating its population faster than any countries in Asia and globally. As of February 20, 82.8 doses of

According to recent data by Statista, more than a dozen of countries in Asia had already started its vaccination drives during the past weeks.

However, the firm noted that some countries are seeing a slowdown in administering vaccines to portions of its population. This includes China, which developed its own vaccines. The consumer company said  China’s vaccination is currently at  at a rate of 2-3 doses administered per 100 people.

Covid-19 have been administered in the country for every 100 people.

India, which started inoculating its people last month, also seemed to be at a slow pace when it comes to its vaccine rollout.

“[I]ndia’s rollout has been somewhat slower at currently 0.8 doses administered per 100 people despite the fact that the country has also developed its own shot and is currently producing the University of Oxford/AstraZeneca vaccine under the name Covishield. Some Indians have shunned the locally developed variety Covaxin since third stage trial results are still outstanding,” Buchholz added. 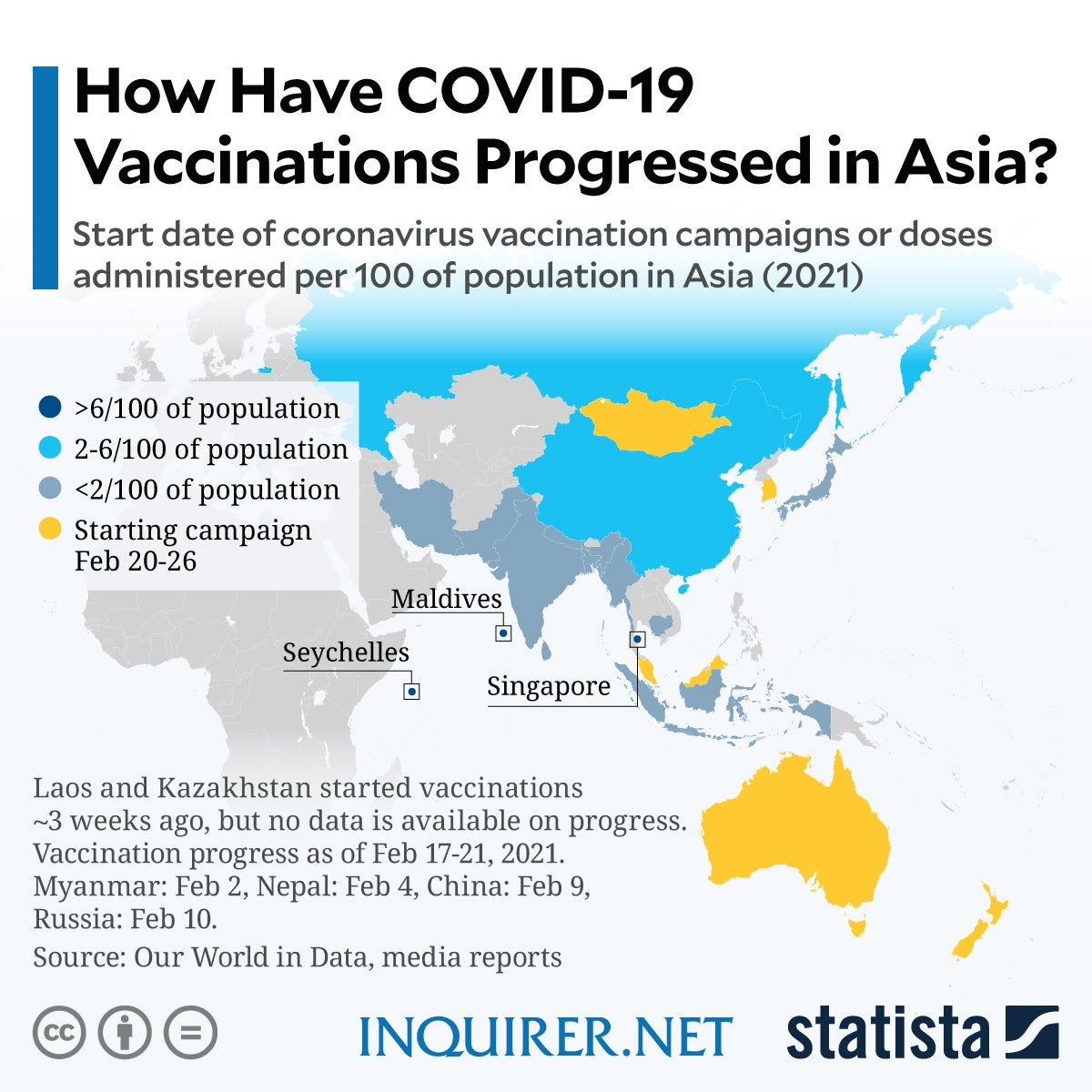 Meanwhile, the firm observed in its report that vaccine diplomacy, donation, and gifts from countries where the vaccines are developed helped several countries to to kickstart their inoculation drive.

“The Seychelles have used China’s Sinopharm vaccine since January 11 and have now already given out 66 doses per 100 people, also using Covishield from India. The Maldives, which like the Seychelles received the Covishield vaccine as a gift, counted almost 14 doses per 100 people since starting the campaign on Feb 1, according to Our World in Data.”

The donation effort of the locally produced University of Oxford vaccine is also benefiting Mauritius, Nepal, Bangladesh, Sri Lanka and Myanmar, among others. China has also donated its vaccines to Cambodia, Laos and Pakistan, while Indonesia is a paying customer to the Chinese.”

Our World in Data showed that the countries in Asia have acquired and/or administered Covid-19 vaccines developed by Pfizer-BioNTech, AstraZeneca, Moderna, Sinopharm, Sinovac, Sputnik V, and Covaxin.

Pfizer-BioNTech uses mRNA (messenger RNA) in its vaccines. According to Centers for Disease Control and Prevention (CDC), mRNA  is a genetic molecule that carries the instructions for making proteins in our body.

This vaccine requires two shots that will be given 21 days apart. It should be kept in a storge with a temperature of -70 degrees Celsius. Pfizer’s vaccine showed a 95 percent efficacy rate during its study.

Explainer: Facts about 7 COVID-19 vaccines Philippines may get

Similar to Pfizer-BioNTech, Moderna’s “mRNA-1273” uses mRNA in its vaccine. Moderna’s vaccine needs to be stored at -20C. Twodoses should be administered with 28 days apart.

Israel received Moderna’s vaccines which has a 94.5% efficacy rate.
China’s Sinopharm vaccine, which reportedly has a 79% efficacy rate, is used in the following Asian countries:

Sinovac, a Beijing-based biopharmaceutical company, developed the CoronaVac which likewise uses RNA and relies on inactivated pathogens that are grown and killed in laboratories.

This is being used in:

CoronaVac can be stored in a standard refrigerator at 2-8 degrees Celsius.

China’s Sinovac Biotech previously received backlash for reportedly having only a 50.4 percent efficacy rate at preventing symptomatic infections in its late-stage trial in Brazil.

This virus, which is not harmful to recipients, will carry spike protein (like the “crowns” in coronavirus). Injecting this, in theory, will help the immune system to recognize and attack coronavirus.

Among the Asian countries that are using this vaccine are:

The researchers noted that the efficacy rate for two doses – with the first dose at half strength – reached 90 percent. While a combination of two full-strength doses only resulted in 62 percent efficacy.

Gamaleya Research Institutes’s Sputnik V vaccine, a two-part adenovirus-based vector vaccine, uses a vector (an engineered virus that lacks the gene to reproduce) to send a message in cells to produce spike proteins.

“The gene from adenovirus, which causes the infection, is removed while a gene with the code of a protein from another virus spike is inserted,” the institute explained.

“This inserted element is safe for the body but still helps the immune system to react and produce antibodies, which protect us from the infection,” it added.

Sputnik V, which was found to have a 91.4% efficacy rate, is administered in: