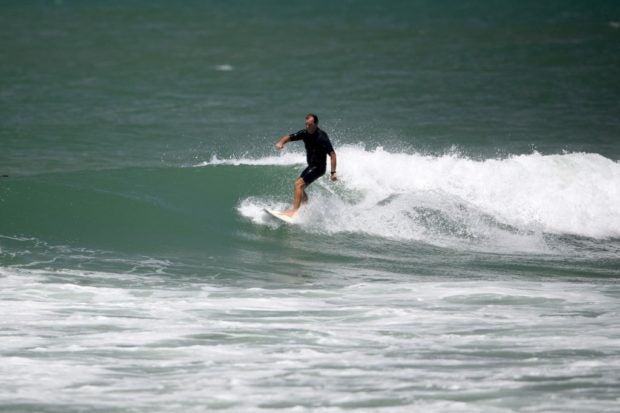 This picture taken on January 23, 2021 shows Dave Pearson, an Australian shark attack survivor, surfing on Crowdy Bay National Park at Port Macquarie, some 127 kilometres (79 miles) northeast of Sydney. – Pearson is the founder of Bite Club, initially a small group for survivors of shark encounters that now includes victims of dog maulings, alligator bites and even a hippo attack. (Photo by Wendell Teodoro / AFP)

CROWDY BAY NATIONAL PARK, AUSTRALIA—The first rule of Bite Club is you talk to Dave Pearson, a shark attack survivor who connects hundreds of people from around the world to support each other “beyond the bite.”

The 58-year-old almost died a decade ago when a bull shark tore into his arm while he was surfing off Australia’s east coast.

Since the day when friends hauled him to shore—away from the three-meter predator that dragged him around the bottom of the ocean before losing interest—he has been helping others escape the psychological grip of nightmare attacks.

“My life is shark attacks,” the wind, sun and surf-weathered Aussie told Agence France-Presse (AFP), still dripping wet after another day on the waves at the beach where he was bitten.

Pearson is the founder of Bite Club, initially a small group for survivors of shark encounters that now includes victims of dog maulings, alligator bites and even a hippo attack.

Its members—nearly 400 people in all—usually meet in person at least once a year, but some meet more often for a casual surf while the rest keep in contact on social media.

The club acts as a network for survivors to seek out support from the group when they need it most. The brutality of maulings—combined with the media attention they receive—can shake survivors, victims, their relatives and rescuers for years and in some cases cause posttraumatic stress disorder.

Paths to recovery differ. But leaving the ocean behind was never an option for Pearson—or for many in the group.

“Surfing has changed for me, and in fact, it’s probably more special now than it used to be because I know the consequences,” he said.

Shark attacks are still incredibly rare, but last year was especially tough for the group, with seven people killed in 22 unprovoked incidents around Australia, according to Taronga Conservation Society.

This makes it the deadliest country in the world for shark bites in 2020, according to global data compiled by Florida Museum of Natural History’s shark research program. —AFP