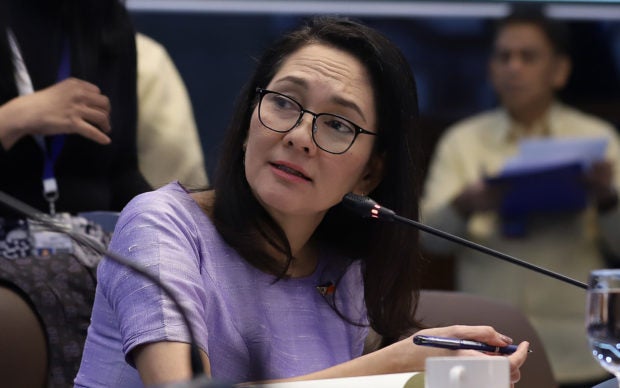 MANILA, Philippines — The National Bureau of Investigation should investigate an alleged new version of the so-called pastillas scam and identify the travel agencies involved, Sen. Risa Hontiveros said in a statement issued on Monday.

Hontiveros said it appeared that travel agencies had long been conniving with foreigners, especially Chinese nationals, seeking to enter the country illegally.

The senator issued her remarks came after NBI arrested in an entrapment operation a law firm worker receiving over P900,000 in cash to facilitate the entry of three Chinese nationals through the Bureau of Immigration (BI).

“I thought it was only Covid-19 that mutates. Well, so does the pastillas scam. Travel agencies have long been involved with the corruption at the Bureau of Immigration in allowing the illegal entry of the Chinese,” Hontiveros said in Filipino.

“Even during a pandemic, the opportunists are still indulging themselves,” she added.

The pastillas scam was named after a cylindrical milk candy called pastillas, each piece of which is rolled in paper. It refers to the money similarly rolled that foreigners give as a bribe to Immigration officials.

Hontiveros exposed the scam in a Senate hearing in February 2020.

According to her, the scheme has been used by Chinese tourists who want to work illegally in the Philippines, some of whom end up working within the controversial Philippine offshore gaming operation (POGO).

As of November 2020, 86 individuals implicated in the scam had been charged, with 83 of them suspended for six months without pay by the Office of the Ombudsman.

Hontiveros said the government should intently look into the issue.

“There are Chinese with criminal records who are able to enter in connivance with a travel agency and those who are corrupt at the BI. I’ve called for a BI overhaul before, and this needs to happen now as it seems the new scam features the same cast of characters,” she said.

“This is a direct threat to our national security. We’ve already established that Chinese syndicates have exploited our women and children, among many other unspeakable crimes. Among those facilitating their entry are travel agencies that have long been selling fake passports and other fake government documents to the Chinese,” she added, speaking partly in Filipino.

The senator insisted that the best way to end the pastillas scam would be to end the visa upon arrival (VUA) system for Chinese nationals, as this allowed travel to the Philippines without visas.

“This VUA should stop. Rotten BI officials should be fired. Travel agencies should be held responsible. There should be a vaccine against corruption because this may be the cause of death of Filipinos,” she said.