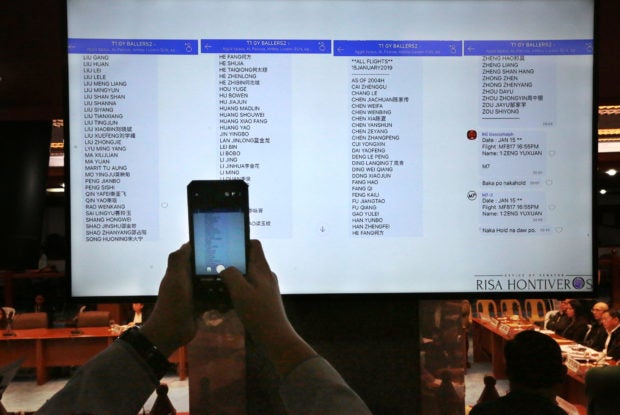 VIP TREATMENT A video screen during a Senate hearing on human trafficking shows the names of scores of Chinese tourists who were given “VIP treatment” and allowed to work in Philippine overseas gambling operators after each one allegedly paid a P10,000 bribe to immigration officers at Ninoy Aquino International Airport. —GRIG C. MONTEGRANDE

MANILA, Philippines — The Bureau of Immigration (BI) on Tuesday said it had relieved five of its airport officers from their posts and began an investigation of alleged payoffs that allowed hundreds of thousands of Chinese to enter the country and work for Philippine overseas gaming operators (Pogo) without permits.

The alleged racket was exposed during Monday’s Senate hearing conducted by Sen. Risa Hontiveros, who called it “pastillas operation” as the money paid was usually rolled up like the popular milk candy.

Hontiveros on Tuesday said the National Bureau of Investigation and the Office of the Ombudsman could conduct a lifestyle check on BI officials and personnel who may have been involved in the scheme of providing “VIP treatment” to Chinese tourists who wanted to work in the country illegally and made to pay a P10,000 “service fee” in cahoots with private tour operators.

“We need to examine if the lifestyle of the BI officials were the same as before when the ‘pastillas’ operation began, or if there had been a drastic change,” she said in a television interview.

The payoffs have totaled around P10 billion since 2016, according to Hontiveros.

Immigration Commissioner Jaime Morente has created a fact-finding committee and gave it 15 days to investigate the racket and submit a report.

According to BI spokesperson Dana Sandoval, Morente relieved the terminal heads of Ninoy Aquino International Airport and the chief of the travel control and enforcement unit.

The officials, who were not named, were relieved due to “command responsibility,” Sandoval told reporters, adding that the “investigation does not revolve entirely around them.”

“We’re looking at the bigger picture, all that might be connected to this alleged scheme, whether internal or external,” she said.

“It does not necessarily mean that [these officials] were pinpointed to be the ones involved. They were relieved to ensure a smooth conduct of investigation,” she added.

Morente said in a statement that he had requested the Department of Justice and the NBI to investigate alleged irregularities involving airport immigration staff, including those who might be engaged in human trafficking and “escort services.”

He added that so far on his watch, the bureau had dismissed and suspended at least 70 personnel for various offenses and filed more than 200 cases.

“There is no sacred cow in this government. ‘If it’s against the interest of the people and general welfare, I’ll stop it.’ This is the kind of President we have,” he said, quoting President Duterte.

Panelo said formal complaints against Pogo operations should be filed so that “we can do something about it.”

“Until such time, the presumption is they’re performing regular task in accordance with the law,” he said, adding that the government was open to rethinking its policies if these negatively affected public interest.

But Sen. Joel Villanueva on Tuesday said there were already “overwhelming” controversies involving Pogos that the only logical move was to suspend their operations.

The “pastillas” racket already showed that “happy days are back for the corrupt,” he said.

“The government is having trouble regulating these Pogos. They are not paying taxes, they are challenging the bounds of our laws, they are not creating jobs for Filipinos,” he said.

“We call on the government to suspend Pogo firms until it is able to rein in wayward companies who skirt around our laws,” he added.

Labor groups are also calling for a halt to Pogo operations.

Their unpaid taxes, the payoffs disclosed during the Senate hearing, human and sex trafficking, prostitution rings catering to Pogo workers, and kidnappings indicate that Pogos are being run by crime syndicates, according to Partido ng Manggagawa (PM).

“PM adds its voice to the growing clamor to shut down Pogos,” said the party’s secretary general, Judy Ann Miranda. “Whoever is the protector of these operations should be revealed and punished.”

The Federation of Free Workers (FFW) said Pogos “do more harm than good.”

“Socially, the entry of Pogos has coincided with the increase in trafficking in persons in the country from the rural areas and from other parts of the globe,” Cainglet said.

Josua Mata, secretary general of the Sentro ng mga Nagkakaisa at Progresibong Manggagawa, said the various social ills that came with Pogos were enough reasons to shut them down.

“If they were strictly prohibited in China, how were they able to set up shop here in our country? Who made a killing by letting them grow like mushrooms?” Mata said.

The Trade Union Congress of the Philippines, however, believes it would be better to just temporarily stop the issuance of visas and permits “given the compromised immigration personnel.”

At the House of Representatives, a police official said Hontiveros’ informants who took clandestine videos of BI personnel in the alleged racket could be held liable for violating antiwiretapping and privacy laws.

Police Maj. Catherine Tamayo of the Philippine National Police Legal Division, however, said “the reasonable expectations of privacy of public employees dispensing public functions that time are diminished.” She was responding to Cavite Rep. Elpidio Barzaga Jr.’s questions about the legality of undercover videos.

“It will not be good on the part of lawmakers … if we do not comply with the laws in congressional investigations,” Barzaga said. —WITH REPORTS FROM JOVIC YEE, JULIE M. AURELIO AND DJ YAP INQ