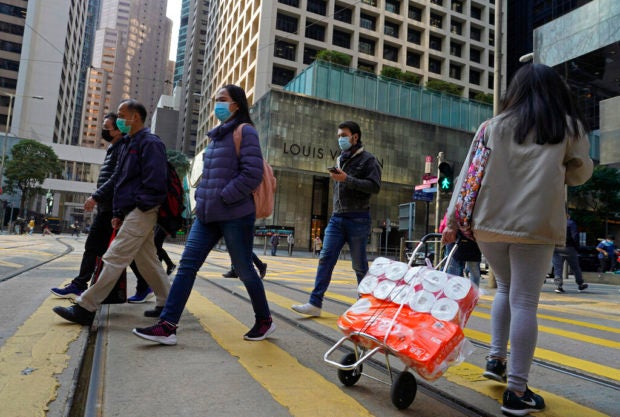 MANILA, Philippines — Filipino migrant workers can now return to their jobs in Hong Kong and Macau after the government eased the ban on travel to and from the two Chinese administrative regions that it imposed 17 days ago to prevent the spread of a new coronavirus epidemic to the Philippines.

Foreign Undersecretary for Civilian Security and Consular Concerns Brigido Dulay Jr. broke the news on Twitter, saying the Inter-Agency Task Force for the Management of Emerging Infectious Diseases had agreed to exempt vacationing Filipino migrant workers from the ban on travel to Hong Kong and Macau.

Later, Foreign Secretary Teodoro Locsin Jr. tweeted that the migrant workers would sign “health waivers,” as the two cities have confirmed cases of the new coronavirus, which has already killed nearly 1,900 and sickened more than 72,000 in China and hundreds more abroad.

“Don’t worry, they’ll sign health waivers but we won’t waive our obligation to take care of them wherever they are,” Locsin said, adding that the Department of Foreign Affairs (DFA) “will never abandon them” if they fell ill.

“Filipino migrant maids and nannies are going back to Hong Kong, where I argued, they’ll be better cared for. Period,” he said.

Presidential spokesperson Salvador Panelo said the interagency task force decided to partially lift the ban to enable Filipino migrant workers to return to their jobs in Hong Kong and Macau.

He said the ban was eased because of “persistent requests” from the migrant workers.

Panelo gave assurance that despite the waivers, the government would still come to the Filipino workers’ aid if they needed it.

The task force headed by the Department of Health (DOH) also exempted from the ban the foreign spouses and children of Filipinos living in Hong Kong and Macau, students studying in the two cities, and diplomats from there.

But the families of Filipinos and the diplomats entering the Philippines will be quarantined for 14 days before they can start going around the country.

The task force said the ban was eased after a “thorough risk assessment of the current situation.”

Also on Tuesday, the DFA said eight more Filipinos aboard the cruise ship Diamond Princess quarantined off Yokohama, Japan, had tested positive for the new coronavirus, bringing the total number of infected Filipinos to 35.

All 35 are members of the ship’s crew. They have been transferred to hospitals for treatment, the DFA said.

It said the 503 remaining Filipinos on the ship would be repatriated if they wanted to come home and once they cleared Japan’s quarantine requirements.

Assistant Foreign Secretary Eduardo Menez said the repatriation would be voluntary. He said the Philippine Embassy in Tokyo was coordinating with the concerned agencies and Princess Cruises, the manager of the Diamond Princess, for the repatriation.

Earlier on Tuesday, Health Secretary Francisco Duque III said in a radio interview that the Filipinos who had caught the virus would not be among those on the ship whom the government would bring home.

“There is a screening before disembarkation and they will not be among those who will be allowed off the ship because they are showing symptoms,” Duque said.

He appeared to be unaware that the ailing Filipinos were in hospitals.

Asked if those who would be repatriated would also be quarantined at Athletes’ Village in Capas, Tarlac province, where 30 Filipinos who had been repatriated from China were under isolation, Duque replied, “Most likely.”

He said the interagency task force discussed the matter on Tuesday.

There is no local transmission of the new coronavirus in the Philippines. In a joint statement on Tuesday, the DOH, Department of the Interior and Local Government and Department of Tourism said it was safe to organize and attend public gatherings, meetings and festivals as long as all precautionary measures recommended by the DOH were observed.

Read Next
ABS-CBN’s fate a press freedom issue, biz groups tell Congress
EDITORS' PICK
IATF to LGUs: Issue ordinances vs attacks on frontliners, COVID-19 patients
10 Filipinos positive for COVID-19 in UK, 7 in Ireland — envoy
Nograles: Cabinet members to donate 75% of monthly salary to aid COVID-19 fight
Diokno to Duterte: OK to make fun of buck tooth, but focus on people’s needs first
Robredo spox thanks Duterte for defending VP’s efforts vs COVID-19
Quick chat with Nicole Andersson: ‘You really don’t need much to be happy’
MOST READ
Gov’t mulling quarantine period extension of 15-20 more days
Sotto on Isko Moreno’s call: We do our job without the media following our every move
ADB warns PH against prolonged lockdown
Duterte fires PACC’s Luna for urging NBI to probe Robredo
Don't miss out on the latest news and information.