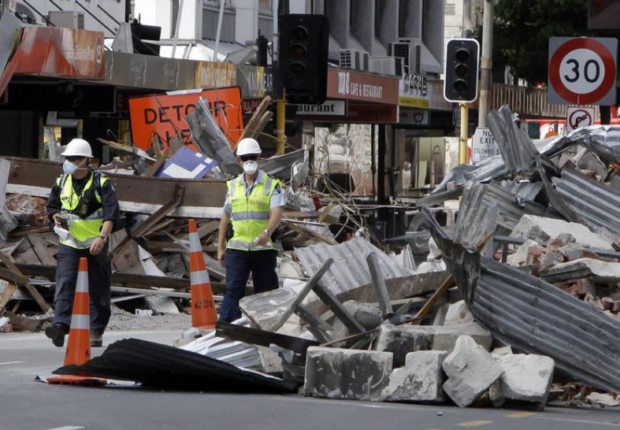 Police officers walk through rubble in central Christchurch March 2, 2011. New Zealand came to a standstill on Tuesday as people marked the moment a deadly earthquake shattered the country’s second-biggest city Christchurch a week ago, and the number of confirmed dead rose by one to 155. REUTERS/Mark Baker/Pool

At 12:51 p.m. on Feb. 22, 2011, the 6.3 magnitude earthquake struck close to Christchurch city at a depth of 5 km. Although not as strong as a magnitude 7.1 quake which hit the area less than six months earlier, its shallow depth and proximity to the city centre resulted in widespread damage.

Hundreds of people gathered at a memorial wall in Christchurch observed a minute’s silence and flags flew at half-mast.

Prime Minister Jacinda Ardern said it was time to look ahead with hope for the future of New Zealand’s second-largest city.

“It’s been a hugely difficult decade for this city – at times I’m sure it’s felt impossible,” Ardern said in a speech at the memorial.

“But as we look ahead to the coming decade, I see hope and energy and optimism, and I see Christchurch taking its rightful place amongst New Zealand’s best and brightest cities.”

About 87 people who died in the quake were foreign nationals from countries including Australia, China, Japan and the United States.

The earthquake damaged thousands of buildings and homes in Christchurch, forcing the government to embark on reconstruction projects that continue a decade later.

Several buildings in the city centre remain empty, and some residents are still embroiled in legal disputes over insurance payouts.

The city was also the target of a terrorist attack in March 2019, in which a white supremacist killed 51 Muslim worshippers and injured dozens of others in a mass shooting in two mosques.