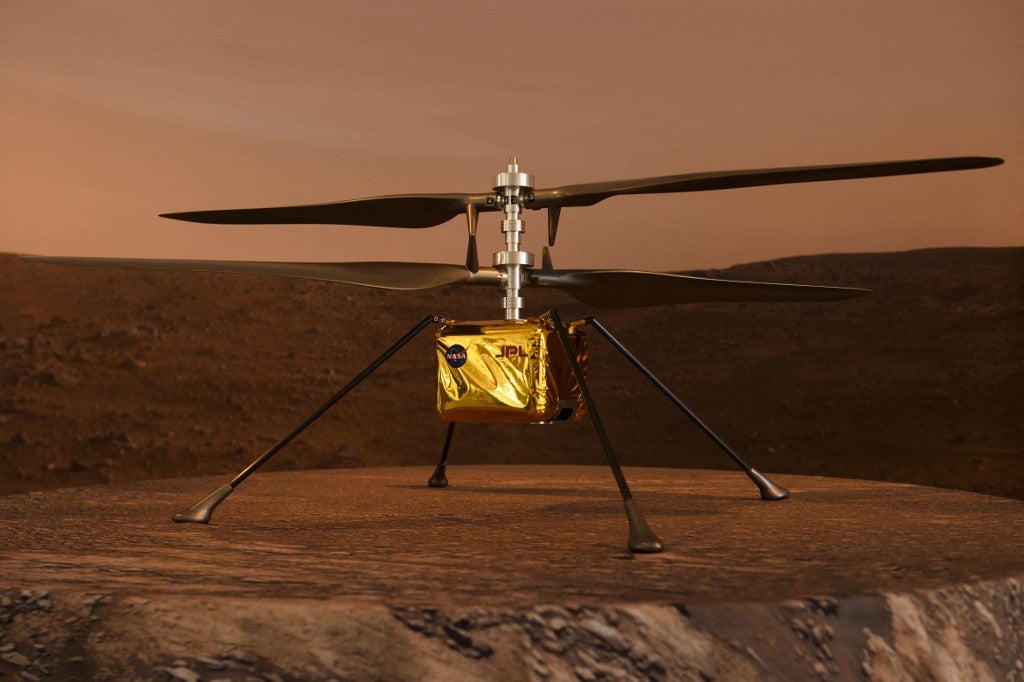 A full scale model of the experimental Ingenuity Mars Helicopter, which will be carried under the Mars 2020 Perseverance rover, is displayed at NASA’s Jet Propulsion Laboratory (JPL) on February 16, 2021 in Pasadena, California.  (Photo by Patrick T. FALLON / AFP)

WASHINGTON — NASA said Thursday that the Perseverance rover has touched down on the surface of Mars after successfully overcoming a risky landing phase known as the “seven minutes of terror.”

The autonomously-guided procedure was completed more than 11 minutes earlier, which is how long it takes for radio signals to return to Earth.

The rover is only the fifth ever to set its wheels down on Mars. The feat was first accomplished in 1997 and all so far have been American.

About the size of an SUV, it weighs a ton, is equipped with a seven foot (two meter) long robotic arm, has 19 cameras, two microphones, and a suite of cutting-edge instruments to assist in its scientific goals.

Perseverance now embarks on a multi-year mission to search for the biosignatures of microbes that might have existed there billions of years ago, when conditions were warmer and wetter than they are today.

Starting from summer, it will attempt to collect 30 rock and soil samples in sealed tubes, to be eventually sent back to Earth sometime in the 2030s for lab analysis.

“The question of whether there’s life beyond Earth is one of the most fundamental and essential questions we can ask,” said NASA geologist Katie Stack Morgan.

“Our ability to ask this question and develop the scientific investigations and technology to answer it is one of the things that make us as a species so unique.”

NASA also wants to run several eye-catching experiments — including attempting the first powered flight on another planet, with a helicopter drone called Ingenuity that will have to achieve lift in an atmosphere that’s one percent the density of Earth’s.