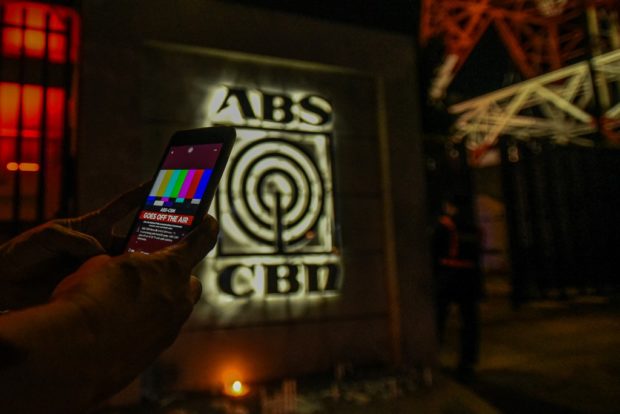 An employee looks at an announcement of a Philippine tv network shut down on his mobile phone on May 5, 2020. The Philippines’ top broadcaster ABS-CBN, owned by the Lopezes, was forced off-air on May 5 over a stalled operating license renewal, drawing fresh charges that authorities were cracking down on press freedom. (Photo by Maria TAN / AFP)

MANILA, Philippines — The chairman of the House panel on good government and public accountability on Wednesday apologized to President Rodrigo Duterte, as he clarified that its probe on the alleged condonation by the Development Bank of the Philippines (DBP) of loans made by companies controlled or affiliated with the Lopez family was only suspended, not entirely stopped.

“I would like to apologize to our beloved President Rodrigo Roa Duterte for any inconvenience that was caused to him by reason of this committee’s first hearing,“ panel chair, DIWA Rep. Michael Aglipay, said during the resumption of the committee hearing.

“Mr. President, I am sincerely sorry and may I humbly request for your forgiveness for the inconvenience that we may have caused you by reasons of these hearings,” he added.

“It was never the intention of this Committee to stop hearing this most important matter, instead the Committee meeting was only suspended in view of the pending submission of documents by the resource persons.”

In his public address on Feb. 8, Duterte once again took a swipe at the Lopezes, saying that he will not allow its network ABS-CBN to operate even if they were granted a fresh franchise.

In that same address, the chief executive further slammed the Lopez family as its companies allegedly did not pay billions to the (DBP), calling it a “write-off.”

Despite the House panel conducting an inquiry concerning this issue, Duterte aired his dissatisfaction and said he will pass the conduct of investigation to the Office of the Ombudsman.

“There were so many investigations about banking except that pagdating kila — sa kila Lopez, huminto sila. So nagkakaroon tayo ng problema diyan,” he said.

(There were so many investigations about banking except when it comes to the Lopezes, it stopped. So we had a problem there.)

(This came to me in official capacity. What I can do here is pass this on to the Ombudsman. For me the Ombudsman is the most independent body that can solve this.)