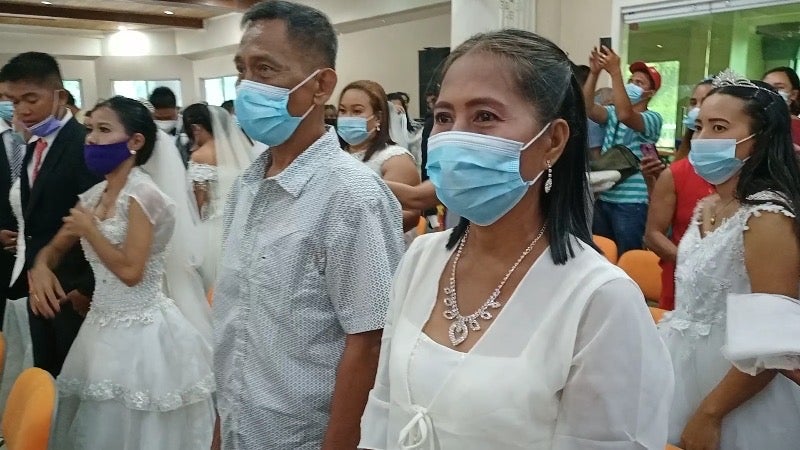 Masks were a must for couples who were wed in Pagadian City on Valentine’s Day in a 22-year-old city tradition. CONTRIBUTED PHOTO

PAGADIAN CITY—They’ve been living together for 22 years, the age of their eldest daughter.

But for Susan Tamsi, 51, and Reynaldo Bancorro, 63, of San Jose village here, their wedding at the Valentine’s Day Kasalang Bayan here only affirmed all their years of struggle and how finally, love conquered all.

Tamsi and Bancorro were among 38 couples that Mayor Samuel Co officially wed here on Sunday, Valentine’s Day, for the city’s 22nd Kasalang Bayan at the city government’s executive function hall.

Co said that because of the COVID-19 pandemic, the number of those who were wed this year had sharply declined compared to more than a hundred pairs in 2019.

For this year’s batch of newly-weds, Tamsi and Bancorro were the oldest.

“We did not marry before because we were struggling hard to earn a living but now that our eldest finally graduated, our expenses become fewer and we feel that we can now finally spare something for the occasion,” said Tamsi, who added that they also needed the right documents for their children.

For 22 years, the city government has been holding the Kasalan ng Bayan every Valentine’s Day at City Hall to wed lifelong partners who had been living together for years without officially getting married, said City Civil Registrar Paulita Sergas.

Co said the official marriage of the parents would greatly benefit their children.

The biggest Kasalan ng Bayan in the city happened in 2003, when 228 couples were wed in a ceremony officiated by the late mayor Henrito Dogon. Sergas said.

“The activity has continued every year and will continue as long as there are unmarried couples committed to marry. This is very important for their future,” she added.

Bancorro said it was tough relying solely on their small eatery to meet their daily needs in the last 22 years but it helped a lot to send their children to school.

After years of struggle that yielded two children, their official marriage now is an affirmation that love conquers all, Bancorro said.

“We survived years of struggle and difficulties,” he said. “Now, this proves that we are now a legal couple.”