Am not presidential? It's not for Duterte to decide – Robredo | Inquirer News
Close
menu
search

Am not presidential? It’s not for Duterte to decide – Robredo 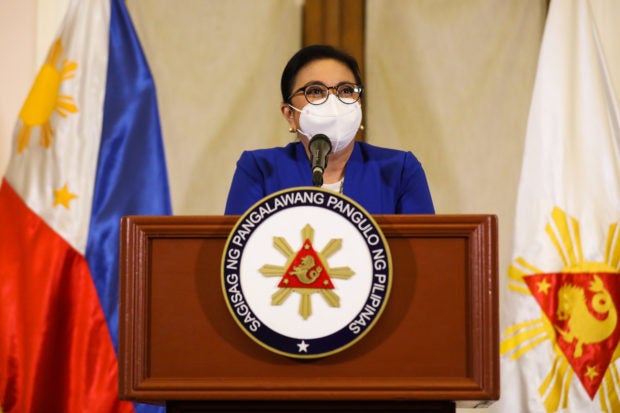 MANILA, Philippines — Vice President Leni Robredo has laughed off President Rodrigo Duterte’s latest tirades against her, particularly his claims that she may not be fit to lead the country.

In a press briefing streamed online, Robredo stressed that the matter of whether or not she is presidential is not for Duterte to decide because such a choice rests in the hands of the voting public.

(If that’s the case, it is not him who would decide if I am qualified [to be a president] or not, it’s for the people to decide. I would not defend myself from that.)

Duterte, in his pre-recorded national address aired on Monday night, once again berated Robredo, who earlier criticized his call for the United States (US) to pay up if it wants to continue the Visiting Forces Agreement (VFA) with the Philippines.

But Robredo expressed hope that Duterte could listen to suggestions even if those propositions would come from fellow government officials who belong to the opposition.

(But for me, it would be better for all of us if officials listen to suggestions and observations about state policies.)

In his speech during inspections of newly-delivered air assets at the Clark Air Base last Friday, Duterte said the US should pay if it wants the country to continue hosting American soldiers.

For Duterte, the Philippines is likely to become collateral damage in the unfortunate event that conflict erupts between the US and China, believing that the country could be a target because of the presence of American forces.

Presidential spokesperson Harry Roque even raised the point in which the US could give bigger military aid to Pakistan than its long-time ally in Asia – the Philippines.

The Palace said the Philippines should have around $16 billion, like Pakistan which got such an amount as counterterrorism assistance from the US from 2001 to 2017. Roque said that in the same period, the Philippines only received a total of $3.9 billion from the US.

READ: Duterte tells US: Pay if you want VFA to stay

But Robredo and Senator Panfilo Lacson deemed Duterte’s propositions as something like extortion, saying it appears the President is asking for payment in exchange for VFA.

The Vice President also emphasized that VFA’s abrogation should be based on merits.

READ: Lacson to US gov’t: Not all Filipinos are extortionists

Robredo’s expression of her opinion regarding the issue caught the ire of Duterte anew. Duterte said he would not forgive Robredo for saying such things because she is a lawyer. He even asserted that the country’s foreign policy direction is part of a sitting president’s prerogative.

He then warned that Robredo would not make a good president and that he is worried about the possibility of her winning the 2022 presidential elections although Robredo has yet to announce her political plans for 2022.

READ: Duterte to Robredo: Extortion? Study more; you’re not fit to be president

(Of course, I am saddened that the response to our suggestions were mere insults, but for me, I cannot control that. What I can control are my actions. It is saddening, but we must continue, we do not get affected by such insults.)