Former Cagayan mayor on Duterte’s ‘narcolist,’ 3 others gunned down 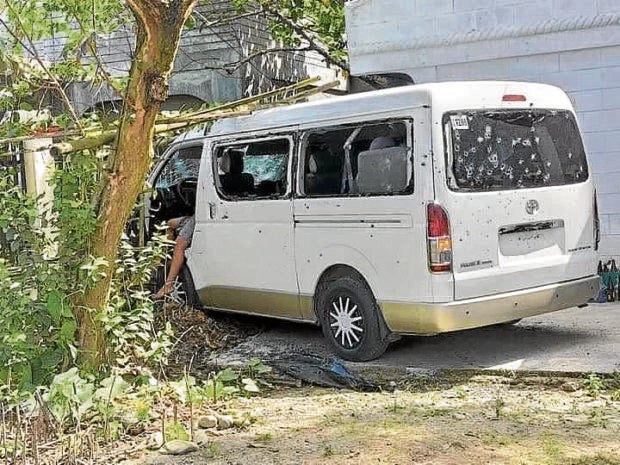 BULLET-RIDDLED The van carrying Lasam, Cagayan, Councilor Marjorie Apil-Salazar, also a former mayor, and three others, is riddled with bullets following an ambush in the town on Monday. —PHOTO COURTESY OF LASAM POLICE

TUGUEGARAO CITY, Cagayan, Philippines — Two former mayors of Lasam town in Cagayan province, one of whom was on President Duterte’s list of narcopoliticians, were killed with their two companions in a daytime gun attack in the town on Monday, police said.

Former Mayors Marjorie Apil Salazar and Eduardo Asuten, both incumbent councilors of the town, and the other victims were heading home on board a white Toyota HiAce when their vehicle was blocked by gunmen on two cars at Barangay Ignacio B. Jurado around 11:30 a.m., said Police Staff Sergeant Jomar Arnedo, Lasam investigator.

The assailants then opened fire at the victims’ vehicle using still undetermined calibers of firearms, Arnedo told the Inquirer.

Investigators said the four, who just came from the municipal hall, died on the spot.

Witnesses said the assailants, who were onboard a blue Hyundai Accent and white Toyota Wigo, immediately fled the crime scene.

Police have yet to establish the motive for the killing.

Salazar, 63, was the latest politician in the country linked to the illegal drug trade who had been gunned down.

Among those recently killed was Mayor Caesar Perez of Los Baños town in Laguna province, who was killed on Dec. 4 last year inside the municipal building compound. Perez had repeatedly denied links to the drug trade.

Salazar was the first known local executive killed in northern Luzon after Mr. Duterte made the “narcolist” public in 2016.

In early 2019, Salazar, while still mayor, sought police protection after she was again tagged in Mr. Duterte’s so-called narcopolitician list.

Salazar, who had been included in the list since 2016, had denied alleged links to the illicit drug trade and sent emissaries to the police to ask for protection.

At the time, she said she felt her life was in danger because of her inclusion on the watchlist of government officials allegedly involved in the drug trade. Salazar served as the town’s mayor for two terms, from 2013 to 2019.

Duterte said he had to publicly name officials supposedly linked to the drug trade, saying “people deserved to be informed.”

Asuten, 67, has no known record of any involvement in any illegal activity, according to town officials. He was a three-term mayor of the town who served from 1992 to 2001.

Incumbent Mayor Dexter Agatep, in a statement on Facebook, called the killings a “dastardly act” perpetrated by “hardened criminals who never value life.”

—With a report from Kimberlie Quitasol