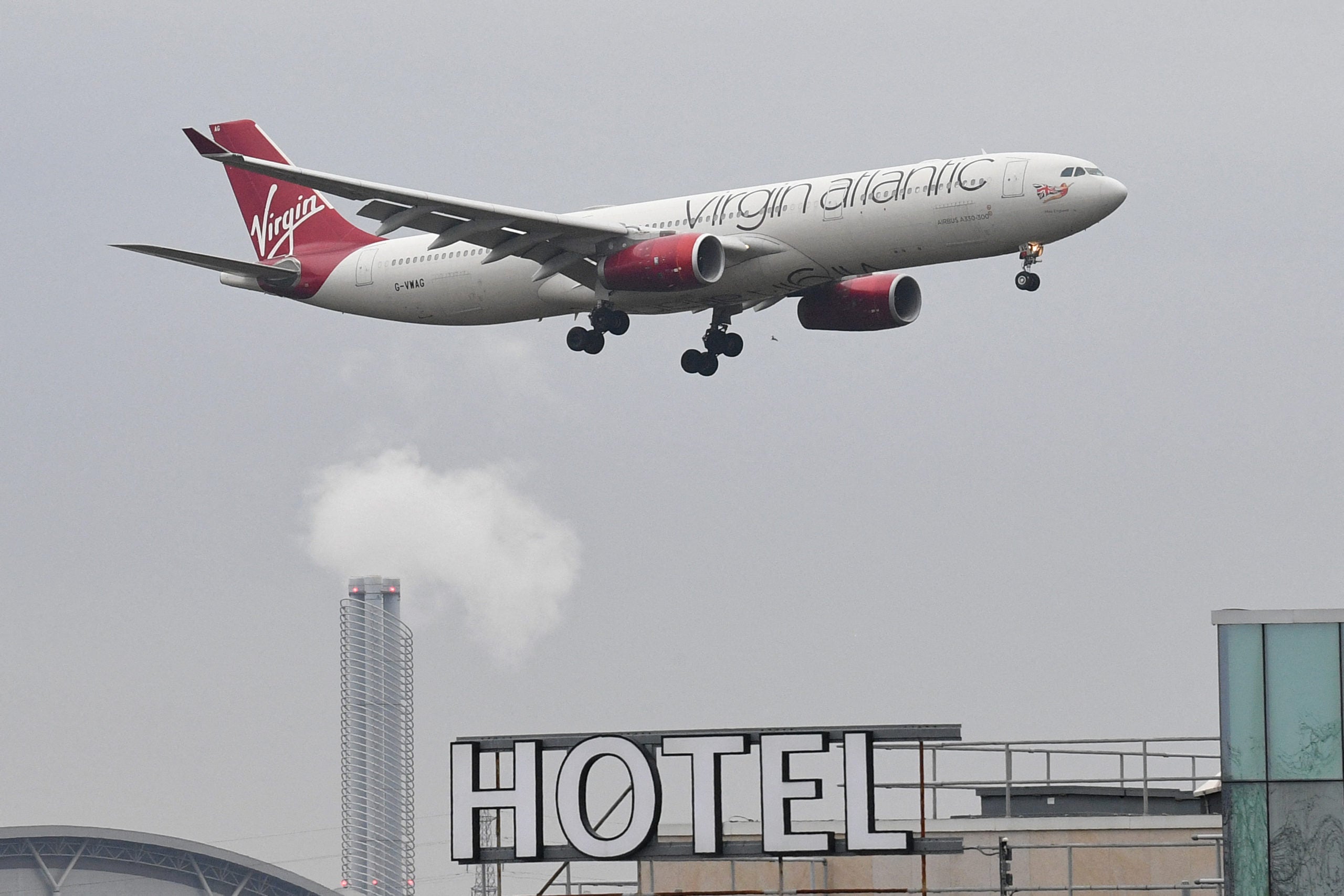 A Virgin Atlantic Airbus A330 passenger plane is seen above a hotel coming in to land at London Heathrow Airport in west London on February 14, 2021. – A new 10-day hotel quarantine regime for travellers arriving in the UK from 33 coronavirus variant hotspots begins on February 15, despite concern from the country’s busiest airport Heathrow that “significant gaps” remain in the plans. (Photo by JUSTIN TALLIS / AFP)

LONDON— The UK government will on Monday introduce mandatory hotel quarantine rules for arrivals from dozens of countries deemed “high risk” for coronavirus variants, as it tries to stop new strains spreading.

The new policy requires all UK citizens and permanent residents entering England from 33 countries on a wider travel ban list to self-isolate in approved hotels for 10 days and take several Covid-19 tests.

Other visitors from the countries currently on the so-called “red list”, which includes all South American nations, South Africa and Portugal, are currently barred from visiting under lockdown rules.

Arrivals found to have given false information about being in one of the countries 10 days before travel could receive up to 10 years in prison — which has drawn criticism for being excessive.

The government says it has signed contracts with 16 hotels so far, securing nearly 5,000 rooms near English airports, with a further 58,000 rooms on standby.

“The rules coming into force today will bolster the quarantine system and provide another layer of security against new variants at the border,” said Health Secretary Matt Hancock, adding that they would also protect the national vaccination program as the country worked “towards restoring normal life”.

The 11-night quarantine will cost people £1,750 ($2,420, 2,000 euros) and includes transport, food, accommodation and security costs, as well as other essential services and testing.

Passengers must have a negative Covid-19 test result from within three days of travel, and book and pay for the package before setting off for Britain.

They will then take further tests on day two and eight of their stays.

The hotel occupants will only be able to leave their rooms in “very limited circumstances”, with exercise among them but requiring “special permission” from staff or security.

A limited list of exemptions from the measures include haulers traveling from Portugal, defense personnel, visiting forces, government contractors and diplomatic missions.

It has vaccinated 15 million of the most vulnerable people with a first jab, and is looking to inoculate all over-50s by May.

The UK now requires all arrivals from non-“red list” countries to show negative Covid-19 tests and then self-isolate for 10 days at a place of their own choosing.

However, Scottish First Minister Nicola Sturgeon has urged the UK government to impose the new hotel quarantine system on arrivals from every country.

Her devolved government was still finalizing plans over the weekend to impose a blanket policy on those landing directly in Scotland from Monday.

But it is unclear if they will include preventing arrivals traveling on to Scotland from England.

Wales, which receives fewer international arrivals than its larger UK neighbors, has said it will not adopt hotel quarantines while Northern Ireland is still to decide.

The British government said it had met with stakeholders from various sectors including aviation and hospitality ahead of finalizing its plans.

Charlie Islam-Harry, manager of the St Giles Heathrow hotel, said staff would do regular welfare checks on guests during their enforced stays.

“It can’t be easy for them to be in a bedroom for 10 days, not having to go anywhere,” she told AFP.

“But obviously while they are quarantined we try to keep as much distance as possible because we obviously don’t know their health situation.”