Duterte will get vaccinated in public if physician approves – Go 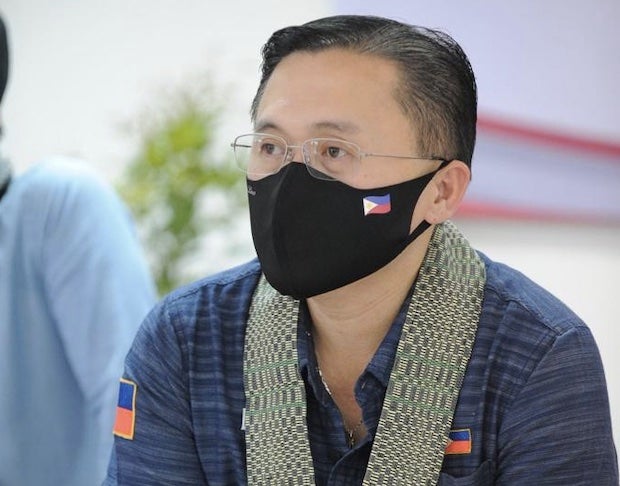 MANILA, Philippines — President Rodrigo Duterte may get himself vaccinated for COVID-19 in public if his physician would approve of it to boost the confidence of Filipinos, Sen. Christopher “Bong” Go said in a statement issued on Sunday.

Last Thursday, Go also gave an ambush interview in which he revealed that he had discussed the issue with the president. Go had just attened the opening the country’s 101st Malasakit Center at the Gov. Roque Ablan Sr. Memorial Hospital in Laoag City, Ilocos Norte.

He noted then that everyone seemed to reluctant to be the first to get vaccinated.

“You know, it’s not because we as officials have the priority in vaccination. That’s not how it should be,” he added. “But as examples, to get the confident of the Filipino people, President Duterte, Secretary [Carlito] Galvez, [Health] Secretary [Francisco] Duque should be the first to be vaccinated.”

Galvez is the chief implementer of the Inter-Agency Task Force on Emerging Infectious Diseases.

In the same interview, Go said the government was already in the final stages of buying vaccines.

“We are making sure that the vaccines are safe and effective,” he said.

Once certified, the vaccines would then be distributed nationwide, with medical frontliner and the poor as priorities in getting inoculated.

Earlier, Go said the 117,000 doses of Pfizer vaccines were expected to be delivered in more or less three weeks based on his discussion with vaccine czar Galvez.

He also shared that the vaccines from Sinovac BioTech to be donated by China were expected to arrive soon and that Duterte was planning to set aside a portion of the shipment for uniformed personnel.

China has pledged to donate 600,000 doses of vaccines while the country seeks to buy 50 million more doses.

Vaccine orders from private companies are expected to also arrive in May as disclosed by Galvez to Go.

Meanwhile, 30 million doses of Novavax vaccine from India are expected to arrive earlier in April until December in phases.

In favor of Bayanihan 3

As for the country’s path towards economic recovery, Go said that he was in favor of the proposed Bayanihan 3 measure to provide further assistance to Filipinos, particularly those who lost their jobs during the pandemic.

A Bayanihan 3 bill has already been filed at the House of Representatives, he said.

“And we in the Senate are ready to support the legislative measures of the president that would be of help to the poor,” he added.

While a Bayanihan 3 measure is being deliberated, concerned government agencies continue to give assistance to Filipinos under their programs, according to the Senator.