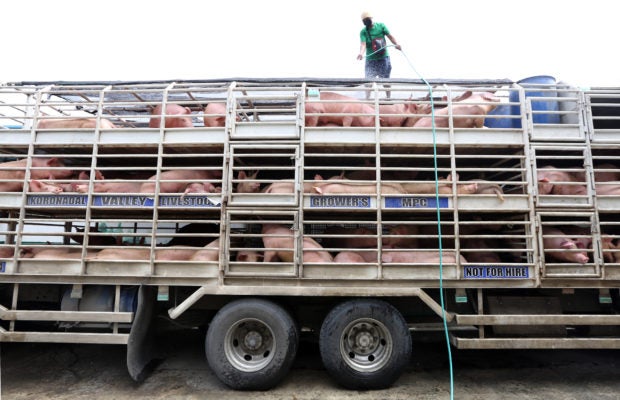 MEAT OF CONTENTION Hogs from the Visayas and Mindanao have started to reach Metro Manila—including this batch from South Cotabato province that arrived at a slaughterhouse in Antipolo, Rizal, on Wednesday—as part of the Department of Agriculture’s efforts to ease a pork shortage in the national capital, where meat retailers have staged a “pork holiday” to protest the price ceilings imposed by the government for 60 days. —NIÑO JESUS ORBETA

MANILA, Philippines — Malacañang on Wednesday said it would convene a food security summit to tackle the spike in pork prices, drop in farm-gate prices of palay, spread of the African swine flu, and other issues currently affecting the country’s agriculture sector.

The summit will also discuss ways to boost and further develop the agrifishery sector with the involvement of local government units (LGUs) and industry players, presidential spokesperson Harry Roque said in a Viber message.

No definite schedule has been set for the meeting, but Roque said the Department of Agriculture (DA) would be the “lead agency.”

The Palace announcement came as a “pork holiday” entered its third day on Wednesday after President Duterte imposed a 60-day price ceiling for pork and chicken sold in public markets and supermarkets in Metro Manila following complaints from consumers of soaring prices of the food items.

Economists have warned that the price caps could lead to higher food inflation and hurt the economy in the long run, and might drive producers and retailers out of business.

Last month, inflation rose to a two-year high of 4.2 percent, due largely to exorbitant pork prices. Government economic managers are trying to keep inflation at 2 to 4 percent this year.

Rep. Stella Luz Quimbo, who is also an economist, said on Wednesday that the imposition of a price freeze was “not tenable” and would only “further undermine supply.”

In a press conference of the House minority bloc, Quimbo explained that a price cap on meat “will work only if a price floor or minimum buying price is implemented for farm-gate prices, or else the burden ultimately falls on the hog raisers/farmers.”

“But price caps at different levels of the value chain would be too difficult and too costly to enforce. We’re better off giving the cash to the farmers,” she said.

Quimbo called for a mixture of policy responses, such as cash assistance for farmers and hog raisers affected by calamities and the African swine fever.

“That money will be added capital for them to ensure that they can continue their farming, hog raising or poultry raising. The important thing is the supply will continue,” she said.

The lawmaker said she had no single solution to price inflation. “We need a toolkit. We need coherent, coordinated polices to avoid prolonged inflation and work towards food security,” she said.

He said a national food security plan would be drawn up to achieve “our vision of a food-secure and resilient Philippines with prosperous farmers and fisherfolks, and where consumers have continuous flow of food and producers have continuous productivity, unhampered movement of agricultural commodities, accessibility and price stability.”

On Wednesday, the DA reported that poultry prices had ranged from P170 to P190 per kilo against the price ceiling of P160.

Chicken raisers have asked the government for fund subsidy, like that given to hog raisers, or a higher price ceiling of P185. citing higher production costs and tightening supply.

But Agriculture Secretary William Dar said the industry did not need incentives. “There is sufficient supply” of chicken, he said, without providing the data the DA collected regularly.

A report from the Philippine Statistics Authority released this week showed that the country’s broiler inventory fell to 53.27 million birds as of January—the lowest in 11 years.

Since the pandemic reached the Philippines, poultry production contracted for the first time after growing at an average of 4 percent annually.

The Cabinet-level Committee on Tariff and Related Matters has asked the Tariff Commission to increase import ceilings and cut tariffs on pork. Rice and broiler producers fear the government would do the same to chicken.

Bong Inciong, president of the United Broilers Raisers Association (Ubra), said a glut in poultry meat last year led to a slowdown in production and a shortage of day-old chicks. From P16 before the pandemic, a day-old chick is now sold as high as P52.

The slowdown also spurred farmers to stop production of corn for animal feed after their crops were hit by a series of typhoons.

Prices of corn feed rose from P14 a kilo to P17 a kilo, while soya, previously priced at P23 a kilo, is now sold at P29 a kilo. International reports projected that it might even reach a high of P34 a kilo.

“The reality is that supply has severely contracted,” Inciong said. “Those who have growing stocks now may suffer if forced to sell at a loss as costs are escalating. They may end up not loading for the next cycle if they think the risk of not earning would be too high.”

He said poultry players were not planning a “chicken holiday” because this would only hurt both producers and consumers.

Members of Ubra are also open to importation to augment the poultry shortfall. But they stressed that tariffs must not be lowered.

“This would rob the industry of revenues that may be used to help domestic players,” Inciong said. “Right now, we are just waiting for Dar to reveal his actual plan.”

Commercial operator San Miguel Corp. has decided to sell its hog and poultry products at breakeven cost to allow resellers to meet the government’s price cap.

The majority of the country’s local suppliers, however, are backyard farms, most of which cannot afford to sell at the same price.