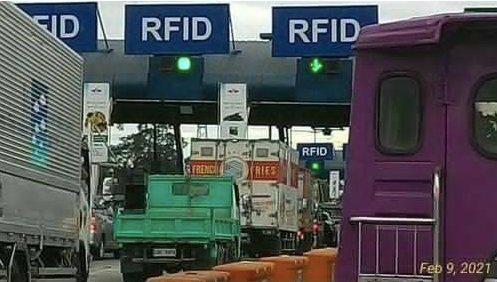 This was a picture sent by a constituent to Valenzuela Mayor Rex Gatchalian, which the latter posted in his Facebook account to drive home his point that the barriers for motorists are no longer needed and would not cause huge traffic at the tollways as some feared. Image from the Facebook page of Mayor Gatchalian

The barriers-up scheme is a solution reached by the Valenzuela government and NLEx to ease traffic passing through the latter’s toll gates, which is being implemented for 17 hours. Under the scheme, radio-frequency identification (RFID) subscribers are not required to stop and wait for tollway scanners or readers to record the toll transactions.

NLEx however claimed that lifting the barriers may cause errant vehicles to cross the line, thereby causing accidents, a claim belied by the city mayor.

“From 5 a.m. to 10 p.m. nakabarriers up kami, at nakadalawang buwan o tatlong buwan na wala namang problema. We are now demanding na buksan nila [NLEx] late until the evening kasi we have given it a try at wala namang naaksidente contrary to what they are saying,” said Gatchalian over Kapihan sa Manila Bay online press briefing.

(From 5 a.m. to 10 p.m. we have barriers up, and we have two months or three months and there’s no issue with that. We are now demanding that NLEx must remove barriers late until evening because we have given it a try and there are no road accidents because of it, contrary to what they are saying).

“So our agenda is to do 24 hours barriers-up na and that’s our agenda to deal with them [NLEx Corp.] today because we wanted to do it mid-February. So we are going to do that,” he added.

The mayor said the barriers-up scheme is “beneficial to traffic” and have resulted in “decongested roads in Valenzuela City.”

Got this from a Constituent. For the motoring public of Valenzuela…you don't need to do a full stop. Just hover at…

Removing barriers in toll plazas means radio-frequency identification (RFID) users are not required to stop and wait for tollway scanners or readers to record toll transactions.

The barriers up scheme was imposed last Dec. 16 after the city lifted the suspension of NLEx Corp’s business permit, which was triggered by the heavy traffic caused by the faulty cashless toll collection.

Read Next
Six held after Tinseltown’s famous sign changed to ‘Hollyboob’
EDITORS' PICK
Metro Manila to remain under COVID Alert Level 2 until December 15
IATF tightens border control, suspends entry of fully vaxxed nationals from ‘green’ countries
Villar Group gears up for AllValue Shopping Party on Dec. 3; around P 1-million promos and discounts up for grabs
Duterte open to making jabs mandatory; Cabinet mulls ‘pressuring’ the unvaccinated
Legarda: Ending Violence Against Women, a cause for all
A delightful blessing!
MOST READ
Quiboloy warns of ‘much worse than Omicron virus’ if his ‘persecution’ is not stopped
Omicron poses ‘very high’ global risk, countries must prepare–WHO
Marcoleta defends pol ads on ABS-CBN
Bongbong Marcos’ conviction in tax case not a crime involving moral turpitude — lawyer
Don't miss out on the latest news and information.