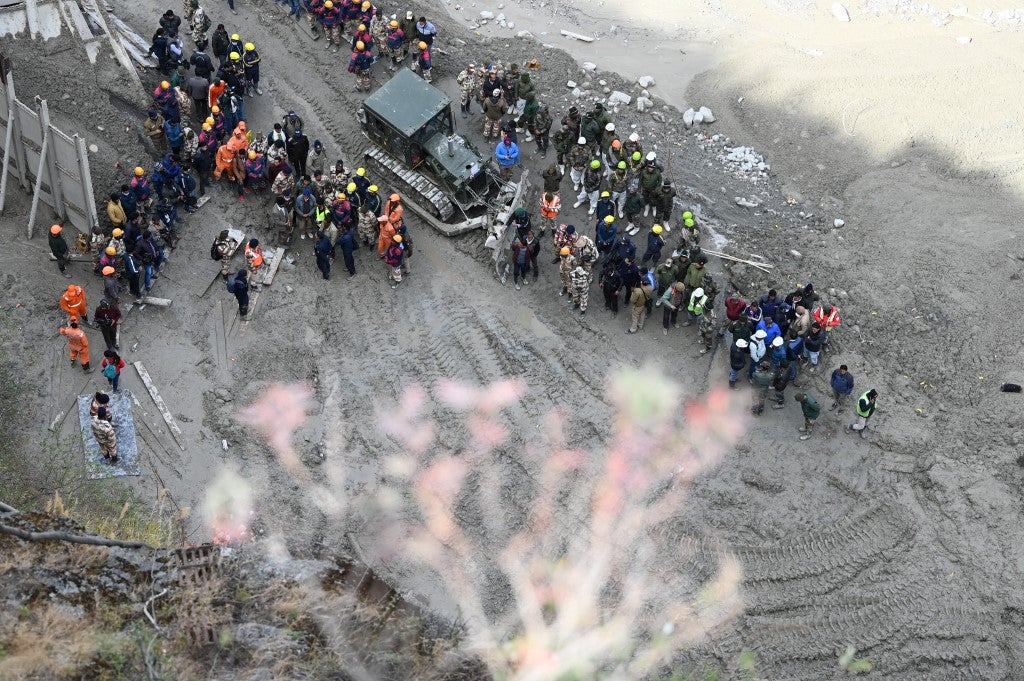 Rescue teams gather near the entrance of a tunnel blocked with mud and debris, where workers are trapped, in Tapovan of Chamoli district on February 9, 2021 following a flash flood thought to have been caused when a glacier burst on February 7. Sajjad HUSSAIN / AFP

More than 170 people were still missing, two days after a wall of water and debris hurtled down a valley in the northern state of Uttarakhand, destroying bridges and roads, hitting two hydroelectric power plants and killing dozens.

The disaster has been blamed on rapidly melting glaciers in the Himalayan region caused by global warming. Building activity for dams and dredging riverbeds for sand — for use in the construction industry — are other suggested factors.

Most of those missing were workers at the two power plants, with some trapped in a 2.7-kilometer (1.7-mile) U-shaped tunnel in Tapovan that filled with mud and rocks when the 20-meter-high (70-foot) flood hit.

Twelve people were rescued from one side of the tunnel on Sunday but another 34 were still trapped at the other end, police official Banudutt Nair, in charge of the rescue operation, told AFP.

Hundreds of workers toiled all night and by morning had cleared their way 120 meters into the tunnel, with rescue personnel “waiting to enter as soon as any movement deep inside the tunnel is possible”, the local government tweeted.

“Work will happen day and night. There will be no break,” said local roads official AS Rathod.

Nair said rescuers were not giving up hope, believing that there were air pockets inside the tunnel, where the workers could still be alive.

Giant floodlights lit up one entrance late Monday as a huge excavator slowly worked its way through the sludge, carrying out huge piles, which rescuers then sifted through looking for survivors, or remains.

Nearby, workers used an excavator to try to remove giant boulders from the road blocking the way to the second power plant, the Rishi Ganga facility.

This was destroyed and was a wasteland covered with brown and grey slush, with a nearby concrete bridge swept away. At least 35 workers and locals were missing.

One of those who made it out of the tunnel was Rajesh Kumar, 28, who together with others clung to scaffolding rods in the tunnel for four hours before the water level fell and they were able to escape.

“Suddenly there was a sound of whistling… there was shouting, people were telling us to come out. We thought it was a fire. We started running but the water gushed in. It was like a Hollywood movie,” Kumar told AFP.

“We just kept telling each other — come what may, we must not let go of the rods,” he said from his hospital bed.

Shopkeeper Ramesh Negi was enjoying the Sunday morning sun when he heard a loud roar and saw a huge wall of water smash into and sweep away a bridge.

Dozens of workers building a concrete dam on the river bed and grazers leading their cattle along the mountain slopes disappeared beneath the sudden deluge, he recalled.

“There was dust and screams all over,” the 36-year-old told AFP.

“We tried to alert the grazers but they were blown away by the wind pressure before being consumed by the water and slush. We can only guess what happened.”

Mangra, another tunnel survivor, remembered hearing a loud, rumbling sound and the screams of other colleagues: “Run, run, run!”

The 28-year-old scrambled out of the tunnel but six of his friends and neighbors from his village remain trapped.

“It felt like the mountain was crashing and the Earth was moving,” Mangra told AFP outside the tunnel, cuts and scrapes on his hands and legs.