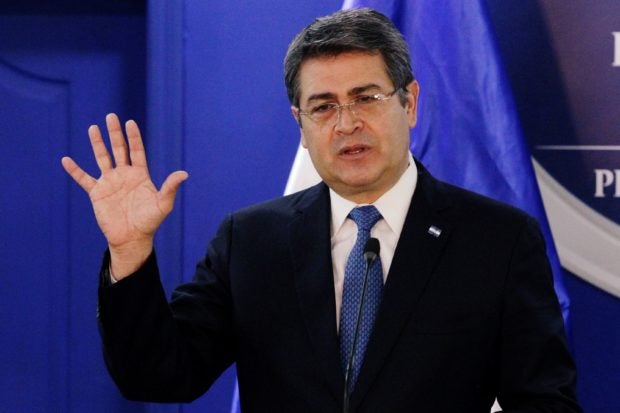 U.S. prosecutors are investigating Honduran President Juan Orlando Hernandez, according to a new court filing, piling pressure on a leader who prosecutors have already accused of participation in the nation’s bloody narcotics trade.

In a document filed Friday night in the Southern District of New York in the case of Geovanny Fuentes Ramirez, an alleged Honduran drug-trafficker, federal prosecutors said Hernandez himself was the target of an investigation, along with other “high-ranking officials.”

They did not say what the investigation concerned. But in the filing they accused Hernandez, who has been president since 2014, of using Honduran law enforcement and military officials to protect drug traffickers as part of a plan “to use drug trafficking to help assert power and control in Honduras.”

Last month, U.S. prosecutors said in a court filing related to the same case that Hernandez had by 2013 “accepted millions of dollars in drug-trafficking proceeds and, in exchange, promised drug traffickers protection from prosecutors, law enforcement, and (later) extradition to the United States.”

The Honduran government did not respond to requests for comment. Hernandez has repeatedly denied any ties to drug cartels.

The Honduran president has been a key U.S. ally in the region and the investigation could complicate the Biden administration’s efforts to invest $4 billion in Central America, including Honduras, to address the causes of migration.

Last month, thousands of Hondurans joined one of the largest-ever migrant caravans hoping to reach the United States, with many citing rampant violence, government corruption, and worsening poverty as their reasons for leaving the country.

Dana Frank, an expert on Honduras and professor at the University of California, Santa Cruz, said the revelations raised difficult questions for the new U.S. government of President Joe Biden.

“Will the Biden administration, despite this further evidence, continue to shore up and fund Hernandez, including his corrupt police and military that protect drug shipments at his beck and call?” she said.

References to Hernandez, who is referred to as CC-4, have frequently appeared in the U.S. court filings against Fuentes Ramirez, as well as in a successful drug-trafficking case against the president’s brother, Tony Hernandez.

Previous court filings also show that, around 2013, the U.S. Drug Enforcement Administration began investigating Hernandez and others for drug trafficking and money laundering.

Friday’s filing appeared to be the first confirmation from U.S. prosecutors that the Honduran president was currently under investigation by the United States.