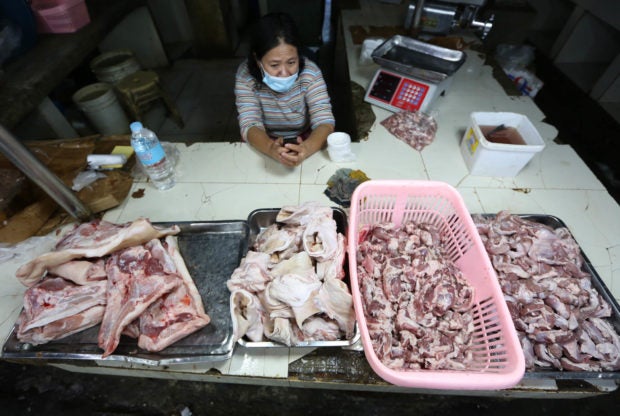 FROZEN STOCK A meat stall owner at Balintawak Market in Quezon City offers her stock of frozen pork as other vendors stop selling fresh meat due to the price ceiling imposed by the government in Metro Manila. —NIÑO JESUS ORBETA

Malacañang on Monday appealed to meat retailers to resume selling pork as it assured them of government assistance and enough supply of pork for Metro Manila consumers.

Presidential spokesperson Harry Roque said the government would bring pork free of African swine fever (ASF) from Mindanao, the Visayas and parts of Luzon to the capital region and would offer hog raisers transport subsidies to bring down farm-gate prices.

Traders and vendors refrained from selling pork and chicken to protest President Duterte’s imposition of a 60-day freeze, starting Monday, on the prices of those meats in public markets and supermarkets in Metro Manila to stem their soaring prices.

The price caps meant a definite loss for many “viajeros” or traders who chose to not deliver hogs from farms, said the Samahang Industriya ng Agrikultura (Sinag), an umbrella group of agricultural business organizations.

“The acceptable retail price of pork, given the current situation, is from P330 to P380 per kilo, without government support,” Rosendo So, Sinag chair, said in an interview on Monday.

The group denied any short supply of hogs but said the price caps ordered by Malacañang were lower than the cost of production and prevented producers from going to market.

In Manila, all 17 public markets went on a pork holiday, according to Director Zenaida Mapoy of the Manila Market Administration Office.

In San Andres and Quinta markets, however, stall owners sold their remaining stocks in the morning, Mapoy said.

Speaking at the Laging Handa briefing on Monday, Agriculture Secretary William Dar maintained that some traders and wholesalers were behind the high farm-gate prices of pork.

Justice Secretary Menardo Guevarra on Monday ordered the National Bureau of Investigation to look into the possible manipulation in the supply and price of pork and other agricultural products, which resulted in the skyrocketing prices of many food items.

Guevarra instructed NBI Director Eric Distor to submit within 30 days results of the investigation and case buildup on violators, “specifically on the existence and operation of certain groups allegedly manipulating the supply and price of pork and other foodstuff.”

Dar said he expected the farm-gate price of pork to be at P165 to P171 per kilo.

He appealed to local governments not to make it difficult for suppliers to complete their deliveries. The DA, he said, would streamline and simplify the permitting process to fast-track the delivery of pork to Metro Manila.

“The viajeros are the problem. They add P150 to P160 to farm-gate prices,” Toto Gonzales, president of Pampanga Swine Producers Association (PSPA), said in a phone interview on Monday.

PSPA informed the DA that its 70 members sold pork at live weight at P200 per kilo, allowing traders to sell at the price ceilings of P270 to P290 per kilo in Metro Manila.

Dar said an initial shipment of 260 live hogs had already arrived from General Santos City and taken to an abattoir in Antipolo City for processing and for eventual distribution in nearby wet markets.

He said the South Cotabato Swine Producers Association had committed to send to Metro Manila 10,000 hogs a week when he met the group over the weekend.

But So denied any promise from the association, a member of the National Federation of Hog Raisers, which he said was part of Sinag.

Roque said importing more pork to ease the supply crisis was also an option but would be a “matter of last recourse.”

The President had already approved “in principle” the pork importation, according to Dar, but the actual increase in minimum access volume had yet to be determined. Dar said the department was undergoing the proper process and conducting consultations first.

A progressive lawmaker warned on Monday that the import plan would push the country’s hog and poultry industry to its “eventual death.”

Bayan Muna Rep. Carlos Zarate said the “highly deplorable actions” of Dar and the DA to check the high prices of pork and chicken needed a congressional investigation.

In a statement, Zarate said importation had always been the “default reaction” of the Duterte administration, citing data from the Philippine Statistics Authority (PSA) which showed that “the local production of pork and chicken is enough for its demand in the Philippines.”

“Now where does the DA get its data that there is a need to import? Is it saying that the PSA data is wrong? “ Zarate asked.

“Also, importation was supposed to be the government’s last resort in dealing with the rising prices since what should have been done first was to increase support for hog and poultry raisers so that they can also increase production,” he said.

“Again, we re-echo these calls given during our dialogue with local raisers and breeders, as well as farmers groups: they need concrete programs to accelerate repopulation of hog stock that is now nearly wiped out by ASF and a stop to more importation,” Zarate said.

“What they seek is government’s support to the agriculture industry and not DA’s or Neda’s (National Economic and Development Authority) proposals to reduce tariff for imports of agricultural products,” he added.

According to him, “these are the recommendations on the ground and we are wondering why the DA [has] not consulted them first.” —WITH REPORTS FROM JODEE A. AGONCILLO, MARLON RAMOS, TONETTE OREJAS AND NESTOR CORRALES INQ

Read Next
Chinese get taste of home for Lunar New Year
EDITORS' PICK
Smart three-peats as country’s fastest mobile network – Ookla
Would the military allow me to stay this long if I’m inutile? – Duterte
In good spirits: SMDC helps farmers and residents through Kadiwa Market
Pre-order the new vivo Y20s [G] to get a free TWS earphone
65% of Filipinos say Duterte’s health should be made public – SWS
DSWD chief admits ‘slow start’ in distribution of aid in ‘NCR Plus’
MOST READ
Vico Sotto frets getting photos of ‘butt vaccination’ from Pasig dwellers
Metro Manila to have shortened curfew hours from 8 p.m. to 5 a.m. under MECQ
San Miguel Corp. continues to invest heavily in the Philippines’ future
COVID-hit Roque slams ‘un-Christian’ query on how fast he secured hospital bed
Don't miss out on the latest news and information.