Baguio mayor agrees he will not leave until a replacement is found
Philippine Daily Inquirer / 04:40 AM February 09, 2021 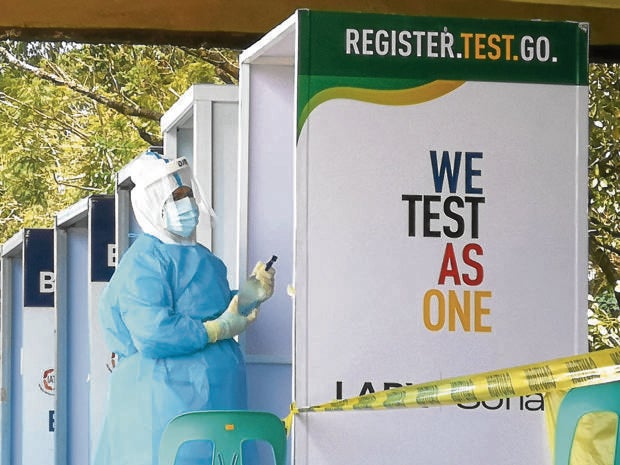 TEST AND GO Baguio City is continuously carrying out mass testing for COVID-19 while on general community quarantine for the entire February. —EV ESPIRITU

BAGUIO CITY—While insisting that his resignation was irrevocable, Mayor Benjamin Magalong on Monday said he continues to discharge his duties as the contact tracing czar for the new coronavirus disease (COVID-19) until the government appoints his replacement.

Magalong resigned last month amid widespread backlash over the health protocol violations during the Jan. 17 birthday party of events organizer Tim Yap at a hotel here that the mayor and his wife attended.

Magalong said he did not want to disrupt tracking operations for carriers of COVID-19 now that its more contagious variant has been detected in the country.

“Obviously, I couldn’t just drop everything,” he told reporters here after the flag-raising ceremony at the City Hall on Monday.

The mayor said he decided to stay “on a holdover capacity” following a meeting last week with Secretary Carlito Galvez Jr., chief implementer of the National Task Force Against COVID-19.

The meeting was also attended by Vivencio Dizon, chair of the Bases Conversion and Development Authority, and the task force’s deputy implementer and testing czar.

The government’s effort to curb the spread of the disease must not stop at any point until the majority of the population has been immunized, Magalong stressed.

Magalong and Dizon have taken the lead in testing, tracing and containing the presence of the UK variant in the Cordillera region, which has infected 18 people there as of Saturday.

The mayor said budgetary problems were being resolved to increase the contact tracers hired for Cordillera.

“The current number of tracers there represents half of the desired manpower … I have asked [Health Secretary Francisco Duque III] to increase it to 100 percent, or if that’s not possible, raise it to 70 percent,” he said.

Magalong said contact tracing teams also needed more encoders for the data banks of people found to have been exposed to COVID-19. The data banks will help the government in analyzing the behavior of transmissions.

The Inter-Agency Task Force for the Management of Emerging Infectious Diseases is using Baguio’s contact tracing system that combines the investigative skills of police officers and digital surveillance applications.

Magalong, a retired police general, used to head the Criminal Investigation and Detection Group before he won his first term as city mayor in 2019. —VINCENT CABREZA INQ