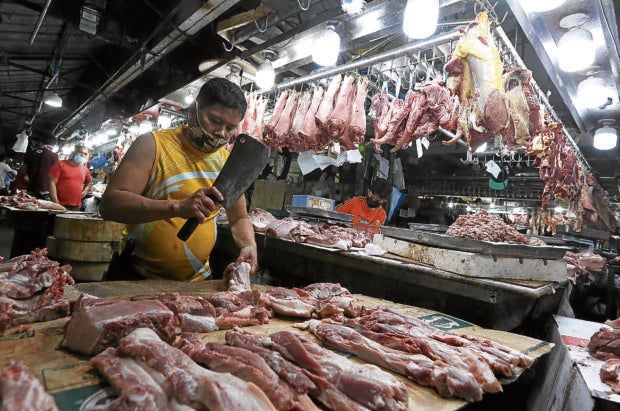 CHOICE CUTS Meat vendors at Commonwealth Market in Quezon City prepare choice cuts of pork as they wait for shoppers as government ordered a price freeze on pork and chicken in the next two months amid high cost of food. —NIÑO JESUS ORBETA

MANILA, Philippines — As pork and chicken vendors bewail steep production costs amid the implementation of a price ceiling in Metro Manila, Malacañang on Monday urged consumers to look for other sources of protein, while appealing to vendors to resume selling pork.

(We support the advocacy to eat alternative protein sources but we appeal to the vendors to continue selling pork.)

Steep production and transport costs have pushed some vendors to hold a “pork holiday” in Metro Manila as the implementation of the price ceiling begins.

President Rodrigo Duterte’s Executive Order No. 124 set price ceilings of P270 for a kilo of “kasim or pigue,” P300 per kilo for “liempo,” and P160 per kilo for dressed chicken.

(Just like what we said earlier, we will get hogs from Mindanao, Visayas and parts of Luzon that don’t have the ASF.)

A group of swine producers from South Cotabato already committed to ship 10,000 live hogs in Metro Manila weekly, the Department of Agriculture said.