5 injured in Cotabato due to magnitude 6.1 weekend quake 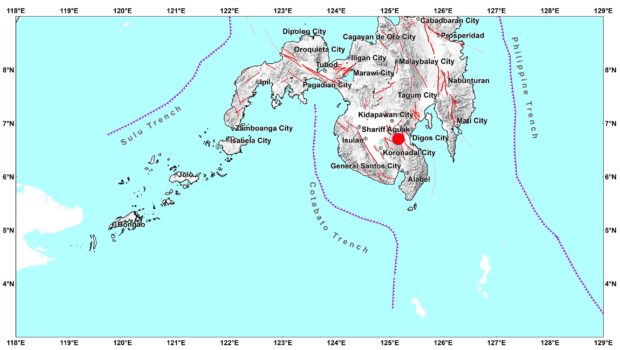 KIDAPAWAN CITY,Philippines — Five persons were injured in Makilala and Kidapawan, Cotabato following a magnitude 6.1 earthquake in Davao del Sur on Sunday, according to the Cotabato Provincial Disaster Risk Reduction and Management Council.

They were rushed to nearby hospitals and have since been discharged.

The National Disaster Risk Reduction & Management Council (NDRRMC) on Sunday night also reported that eight houses and two churches in M’lang, and a hospital in Sultan Kudarat were damaged due to the earthquake.

The earthquake, initially measured at magnitude 6.3, struck five kilometers southwest of Magsaysay, Davao del Sur at 12:22 p.m., according to the Philippine Institute of Volcanology and Seismology (Phivolcs).

It had a depth of 10 kilometers.

It was felt at Intensity VII and VI in M’Lang, Makilala and Kabacan, Cotabato and Intensity VI in Isulan, Sultan Kudarat, according to Phivolcs.