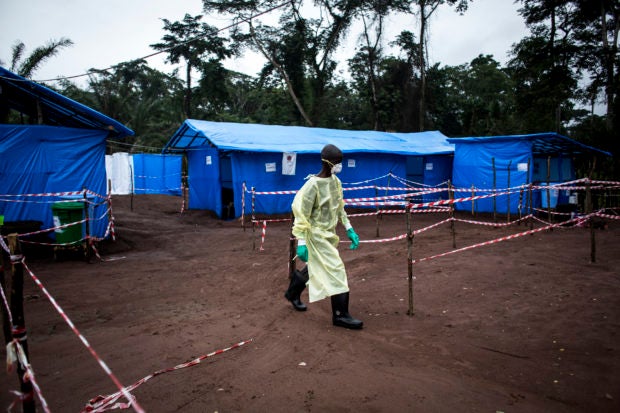 In this file photo taken on June 13, 2017 A health worker walks at an Ebola quarantine unit on June 13, 2017 in Muma, after a case of Ebola was confirmed in the village. – A woman died of the Ebola virus disease in eastern Democratic Republic of Congo on February 7, 2021, Congolese Health Minister Eteni Longondo announced, noting the “resurgence” of the disease in the country. (Photo by JOHN WESSELS  / AFP)

BENI, DR Congo  –  Congo on Sunday announced a “resurgence” of Ebola in its troubled east after a woman died of the disease, just three months after authorities declared the end of the country’s latest outbreak.

The World Health Organization (WHO) said it had dispatched a team of epidemiologists to the scene of the latest death to investigate.

“We have another episode of the Ebola virus” in the Biena health zone of North Kivu province, Health Minister Eteni Longondo told state television RTNC.

“It was a farmer, the wife of a survivor of Ebola, who showed typical signs of the disease on February 1,” he added.

She died on February 3, after which a sample of her blood tested positive for Ebola, the health ministry said.

The WHO’s Africa office said the woman had died in an area that had previously been one of the epicentres of the latest outbreak, near the town of Butembo.

“It is not rare that sporadic cases continue after a major epidemic,” the WHO said in a statement.

It added that WHO epidemiologists were in Butembo investigating, and that more than 70 people who had been in contact with the woman had already been identified.

“The disinfection of sites visited by the patient is also underway,” the UN agency said.

Since the West African Ebola crisis of 2013-16 — which left 11,300 dead across the region — the WHO has eyed each new outbreak with great concern, treating the most recent Congolese epidemic  as an international health emergency.

DR Congo had on November 18 declared that epidemic, which lasted nearly six months in the northwestern province of Equateur, to be over. It was the country’s eleventh Ebola outbreak, claiming 55 lives out of 130 cases.

The last person declared recovered from Ebola in Equateur was on October 16.

The widespread use of vaccinations, which were administered to more than 40,000 people, helped curb the disease.

The return of the virus in the country’s northeast — a region plagued by violence between armed groups — comes as the vast African country is also fighting its own Covid-19 outbreak, with 681 deaths to date.

It was also the second highest toll in the 44-year history of the disease, surpassed only by the three-country West African outbreak in 2013-16.

Ebola haemorrhagic fever was first identified in 1976 after scientists probed a string of unexplained deaths in what is now northern DRC.

The average fatality rate from Ebola is around 50 percent but this can rise to 90 percent for some epidemics, according to the WHO.

The virus that causes the disease is believed to reside in bats.