MANILA, Philippines — Janitors, medical students and persons with comorbidities are among the priority recipients of COVID-19 shots in the government’s vaccination drive, which is expected to begin this month.

The Inter-Agency Task Force for the Management of Emerging Infectious Diseases (IATF) has approved a “prioritization criteria” for vaccine distribution at the national and local government levels as well as in the private sector, presidential spokesperson Harry Roque said on Friday.

According to the approved criteria, those under priority group A1 are “front-line workers in health facilities, both national and local, private and public, and health professionals and nonprofessionals, such as students, nursing aides, janitors, barangay health workers, etc.”

Priority group A2 refers to senior citizens 60 years old above, while priority group A3 pertains to persons with comorbidities or simultaneous ailments.

Under priority group A4 are front-line workers in the “essential” sectors—including uniformed personnel—that were identified by the IATF during the implementation of enhanced community quarantine (ECQ) restrictions from March to June last year.

Under ECQ, allowed to operate at full capacity were hospitals, dialysis and chemotherapy centers and other medical facilities; manufacturers of medicines, medical supplies and equipment; industries involved in agriculture, forestry and fishery; and delivery and courier services transporting food, medicines, and other essential goods.

Indigents are classified under priority group A5.

B4 covers “indigenous peoples (IPs)’’ and “sociodemographic groups with significantly higher risk of COVID-19 infection other than senior citizens.”

Overseas Filipino workers (OFWs) are listed as B5.

Category C covers the rest of the Filipino population not included in the other groups.

During an online press briefing, Dr. Razel Nikka Hao of the health department’s COVID-19 surveillance and quick action unit, said 116,000 health workers—all from Metro Manila—had so far signed up to be vaccinated. Registration is still ongoing, she said.

The DOH said it expected around 117,000 doses of the Pfizer-BioNTech COVID-19 vaccine to be available by mid-February.

On the other hand, an estimated 5 to 9 million doses of the AstraZeneca vaccine from the COVAX global supply facility is expected by the second quarter.

According to Roque, the geographical areas to be prioritized for the vaccine rollout would be based on the number of active cases, the attack rate per 100,000 population in the past four weeks, population density, and the local government’s readiness to carry out the inoculation program. 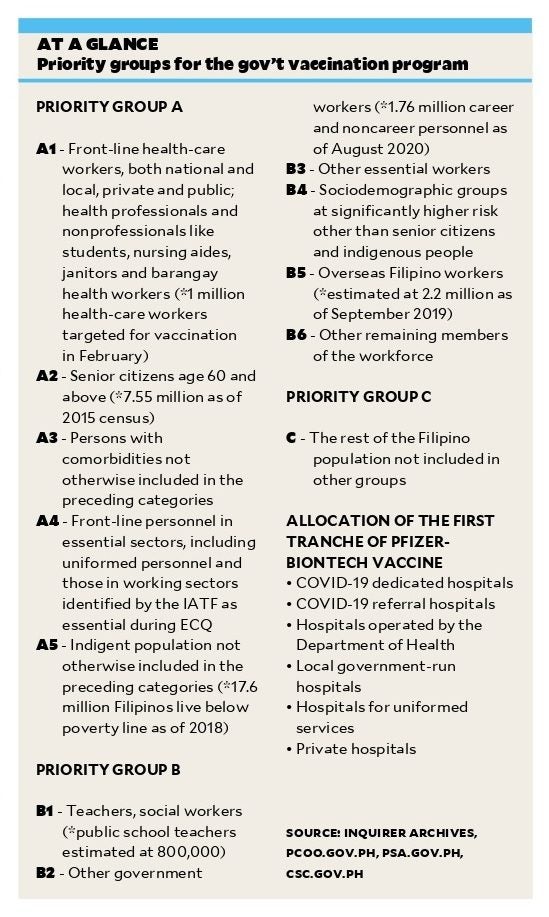 Why in that order?

At the House, Deputy Minority Leader and Bayan Muna Rep. Carlos Isagani Zarate questioned the government decision to prioritize the police and military over the poor.

“Poor families almost have nothing to eat and have no jobs, the prices of basic goods are rising, with little help from the government. Now they were edged out by soldiers and policemen in the list of priority vaccine recipients,” the opposition lawmaker said.

Zarate said the military and police would end up being “VIP” vaccine recipients, recalling how members of the Presidential Security Group already managed to get themselves inoculated late last year even with the government yet to approve any COVID-19 vaccine for local use.

“The Inter-Agency Task Force should restore the poor to fourth place in terms of vaccine prioritization like it was before, and the police and military should be fifth priority,” Zarate said.

Of the active cases—which represent 6.4 percent of the total—majority, or 89 percent, have mild symptoms, 6 percent are asymptomatic, 2.3 percent are in critical condition, 2.2 percent have shown severe symptoms, and 0.51 percent have moderate symptoms.

Another 46 cases previously listed as recoveries were reclassified as deaths after final validation.

Six laboratories failed to submit their data on time, the DOH added. With a report from Julie M. Aurelio