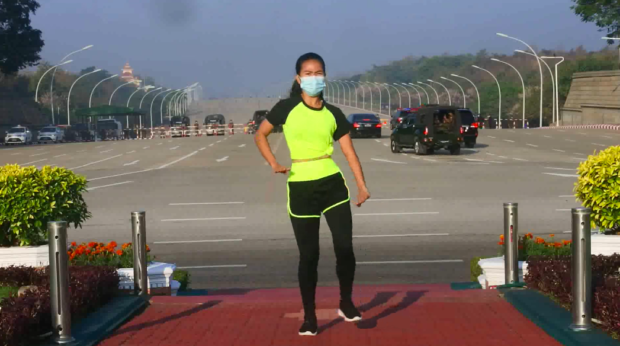 As the military staged a takeover in Myanmar, one woman danced her heart out near the country’s parliament complex, unaware of the historical event unfolding.

Khing Hnin Wai, who lists herself as a physical education teacher on Facebook, unknowingly captured military vehicles entering Myanmar’s seat of power when she filmed a dance video yesterday, Feb. 1, in the capital of Naypyidaw.

The teacher dances enthusiastically to Indonesian music in the video she uploaded to Facebook on Monday, Coconuts reported today, Feb. 2. She is unfazed as a number of black vehicles including armored cars roll up to a checkpoint and enter the complex,

“The background scene and the music kind of match,” she quipped. “I was filming the clip for a competition before the morning’s news came out. What a memory!”

In another Facebook post today, Khing Hnin Wai shared her previous videos shot in the same location, explaining that she had been dancing in the area over the past months, as per The Guardian.

The coup took place on what was supposed to be the first day of a new Parliament session after Myanmar’s popular political party won the elections in November. The military claimed that fraud had taken place as it lost by a landslide to state counsellor Aung San Suu Kyi’s party. Suu Kyi and other top leaders were detained in the military raid on Monday. Niña V. Guno /ra