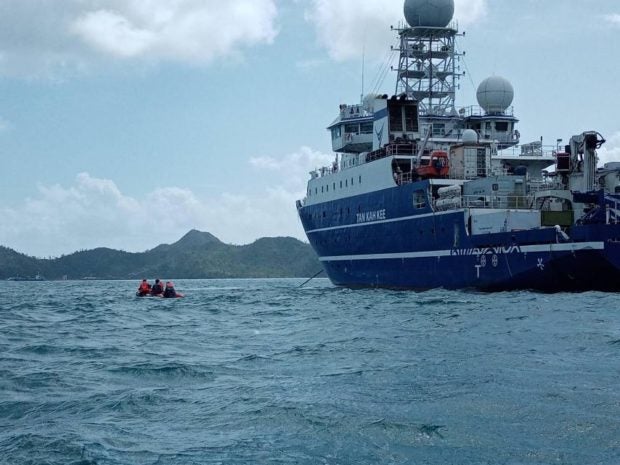 The crew of Chinese research ship Jia Geng that entered waters off Catanduanes province without clearance from the Philippine government refused access to Philippine Coast Guard supposedly because of COVID-19 protocols. PCG

MANILA, Philippines — A Chinese ship that was spotted in northern Philippine waters in 2020 was sighted again, this time on the country’s eastern side before it left that area on Monday morning.

But according to the Philippine Coast Guard (PCG), the research vessel Jia Geng had secured diplomatic clearance to take shelter in Cabugao Bay, Catanduanes, where it dropped anchor on Jan. 29. The Coast Guard said it kept a close watch on the ship.

The reported presence of Chinese ships in Philippine waters has prompted lawmakers in the House of Representatives to call for an inquiry into the intrusions.

While in Philippine waters, “Immediately, PCG Catanduanes deployed boats to board said vessel,” a report by the Coast Guard said. “But the captain [of Jia Geng] refused … due to health protocols. Thus, PCG asked for documents for verification.”

The documents showed that the Jia Geng was a “marine scientific research vessel of China,” the Coast Guard said.

“On Jan. 30, the Department of Foreign Affairs informed the PCG that the Chinese Embassy [was] requesting … diplomatic clearance for said vessel to take shelter in Catanduanes due to bad weather and sea condition,” the report said.

When the ship left on Monday, 6 a.m., a “PCG Islander plane was … dispatched to overfly while said vessel [was] exiting our waters,” the Coast Guard said in its report.

The Jia Geng’s request for shelter aroused the curiosity of some local maritime authorities because there was no weather disturbance, despite the northeast monsoon affecting the entire country.

Maritime law expert Jay Batongbacal said the ship’s presence in the Philippines should be given attention because China had not yet given any explanation for previous intrusions. Last week, authorities seized a Chinese dredger on the waters off Bataan and Bulacan provinces.

But the Chinese Embassy on Monday issued a statement saying “the fact is that the Chinese scientific survey ship is seeking humanitarian shelter in Philippine waters due to unfavorable weather and sea conditions in the Pacific where they are scheduled to conduct research mission.”

It added that the ship sought clearance and humanitarian assistance from the Philippine government and “maintained communication with its relevant authorities all the time.”

“Everyone is entitled to freedom of speech. However, malicious hype-up and irresponsible and baseless accusations that run counter to common sense are not acceptable and should not be appeased in a society that believes in rule of law and international norms as well as mutual respect,” it said.

The embassy said it “noticed with regret many false accusations against China on the newly passed China Coast Guard Law and some other issues related to China.”

“It is a fact that China and the Philippines have been rendering assistance to each other on many similar humanitarian occasions,” it said.

Amid these developments, Zamboanga Sibugay Rep. Ann Hofer, chair of the House committee on foreign affairs, said the committee “is set to schedule at the soonest possible time a briefing by the Department of Foreign Affairs (DFA) on the state of our bilateral relations with China vis-a-vis the developments in the West Philippine Sea.”

“The committee is sure to bring this matter up and we expect DFA to enlighten us on these reports,” she said.

Muntinlupa City Rep. Ruffy Biazon, the vice chair of the House national defense and security committee, said “the government should not allow these unauthorized incursions to go unchallenged because it is [an] affront to the country’s territorial integrity and sovereignty whenever foreign vessels operate within Philippine waters without prior coordination and authorization.”

The Makabayan bloc filed House Resolution No. 1528 calling for an inquiry into the Chinese ships operating in Philippine waters.

“It is the duty of Congress to ensure that the country’s sovereignty and territorial integrity are intact, local and international laws be honored and recognized, and more importantly, the safety and economic rights of the people are protected and ensured,” the resolution read.

The group also cited reports of Chinese dredging in the Philippines since 2017.

Presidential spokesperson Harry Roque on Monday said: “The question is: Where were these dredging vessels used? Maybe these were used in some areas of the country with the permission of the local government.” —WITH REPORTS FROM TINA G. SANTOS AND LEILA B. SALAVERRIA INQ