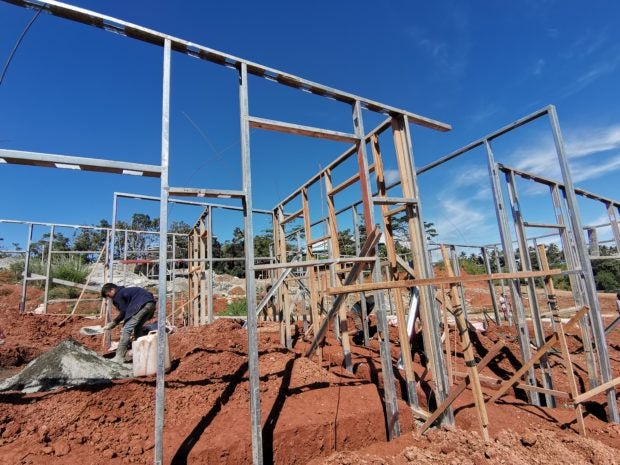 Workers double their time to finish some 50 units of permanent shelter in Barangay Gadongan, Marawi City, a project of UN-Habitat for the families displaced by the Marawi siege. DIVINA M. SUSON

Hataman pointed out that the bill providing monetary compensation to residents affected during the 2017 Marawi City siege seems to always be “last on the line.”

“Sobrang tagal na nito. Ang dami nang ibang sakuna ang dumating, pero parang laging inihuhuli sa pila ang Marawi (This issue has been here for so long. There are a lot of calamities that happened, but it seems like Marawi is always last on the line),” Hataman said in a statement.

(I hope this can be passed so the rehabilitation of Marawi can be included in President Duterte’s legacy. I appeal to the President, as someone from Mindanao too, to certify the compensation bill as urgent.)

Hataman said that as the deliberations near for the 2022 national budget, passing the measure to compensate Marawi residents becomes imperative if Congress is to include the funds for the victims of the 2017 siege.

Currently, the Marawi compensation bill has passed in the House’s committee level while its counterpart measure remains pending in the Senate.

(If we are not going to prioritize this compensation bill, the House and Senate might not be able to tackle this before passing the 2022 budget and this issue will be overshadowed by issues such as charter change and extending the transition period of BARMM.)

Further, Hataman said that government priorities should not see pandemic response and the Marawi situation “as an either-or proposition.”

(We know that all hands should be on deck in responding to the pandemic and we need funds for it. But the more that the Marawi rehab is delayed, the more that evacuees from Marawi are forced to crowd in communities.)