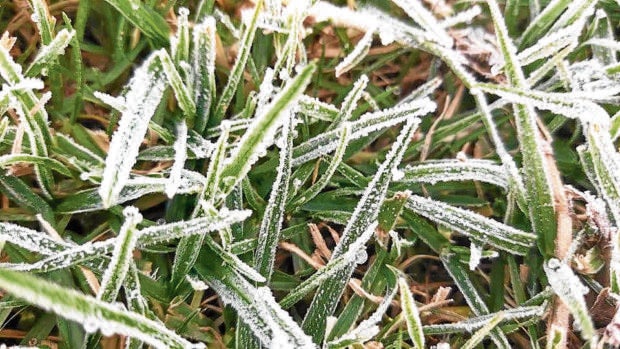 FROST COVER Shrubs and vegetable patches in Atok town, Benguet province, are covered in frost over the weekend due to the dipping temperature, which plunged to 8 degrees Celsius on Sunday morning. —PHILIP JOHN HAIGHT/CONTRIBUTOR

BAGUIO CITY—Temperature in this city plunged to 9.4 degrees Celsius on Sunday morning, the lowest so far in the last four years.

The chill was recorded at 6:30 a.m., according to the synoptic station of the Philippine Atmospheric, Geophysical and Astronomical Services Administration (Pagasa) here. It matched the coldest temperature last year, which was at 9.4 C.

It could still get colder as the northeast monsoon prevails in February, she said.

The temperature was even colder at the top of Mt. Sto. Tomas, the highest peak in the city, which dropped to 6.8 C around 9 a.m., also on Sunday, according to Pagasa. The mountain, which sits 2,260 meters above sea level, traverses Tuba town in Benguet province.

Residents in Atok town, also in Benguet, said frost covered some vegetable patches due to the dipping temperature. Known for its flower and vegetable farms, Atok is located along Halsema Highway, the highest point in the country’s highway system.

Morning temperature there was recorded at 8 C at 5: 30 a.m. on Sunday. —VALERIE DAMIAN INQ