Get the Bernie look, or something like it, with Vermont knitter's mittens | Inquirer News
Close
menu
search

Get the Bernie look, or something like it, with Vermont knitter’s mittens 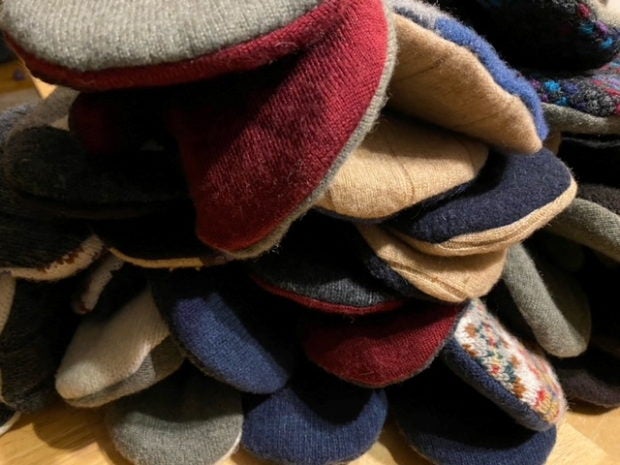 U.S. Senator Bernie Sanders may be an unlikely fashion trendsetter but memes of his Inauguration Day mittens sparked demand for lookalikes that is keeping a Vermont knitter busy and helping take charitable donations toward $2 million.

The independent senator from Vermont wore a facemask, parka and recycled wool mittens as he sat bundled up against the cold at President Joe Biden’s swearing-in on Jan. 20 in Washington. The look, in cozy contrast to the formal garb worn by those around him, struck a chord and internet photos of him were transposed onto countless scenes from history, art and popular culture.

Jen Ellis, the teacher who gave Sanders the mittens, received a flood of requests for similar gloves and in response she suggested contacting a fellow knitter, Lise-Anne Cooledge, whose daughter was in her elementary school class in Westford, Vermont, a decade ago.

Cooledge, 53, whose small business From This to That produces recycled merchandise, pledged to “handcraft 100 Swittens (repurposed wool sweaters) that will be sold at $200 per pair (and) part of the proceeds will benefit local Vermont food charities.” Within a day, the 100-order limit was reached, she said.

“Creating a new purpose for something that would normally be discarded is really fun,” Cooledge said.

Cooledge warned the Switttens on order might not exactly echo those that Sanders wore. “Remember this is a repurposed sweater,” she said. “Part of the appeal of Swittens is they are repurposed from felted, wool sweaters of various patterns, colors and knits.”

Money she raises will add to funds for charity already drummed up by the meme.

A Texas artist raised $40,000 for Meals on Wheels, which benefits senior citizens, by auctioning a doll crocheted in Sanders’ image.

Sanders’ meme merchandise – including T-shirts, sweatshirts and stickers emblazoned with his viral photograph – has raised $1.8 million for Meals on Wheels and other charities.

Ellis created additional mittens and donated them for fundraising to Passion 4 Paws Vermont and Outright Vermont, the Associated Press reported.