MANILA, Philippines — The family of flight attendant Christine Angelica Dacera has called for a DNA test to confirm that the organs examined by police were indeed hers, as they disputed yet again new evidence indicating that her death was due to natural causes.

“The Dacera family demands a DNA test of all specimens and alleged organs of the late Christine. The family does not believe that Christine has an enlarged heart. We believe there is a cover-up,” lawyer Brick Reyes, the family’s spokesperson, told reporters on Friday.

The family said it would consent to exhuming the body in General Santos City if it was needed for the DNA exam. “If we have to do [the DNA test] abroad, let’s do it abroad, just so we can ensure that there is no cover-up,” Reyes said.

He described the report of the Philippine National Police-Crime Laboratory Office (PNP-CLO) as nonsense (“kalokohan”), particularly the opinion that Dacera was afflicted with chronic hypertension. “How can a 23-year-old flight attendant flying 30,000 feet above four times a day develop that disease? There’s no evidence,” Reyes said.

He also cited the medical tests conducted by Dacera’s employer, Philippine Airlines, that showed “her heart is normal, [and she has] no hypertension.” 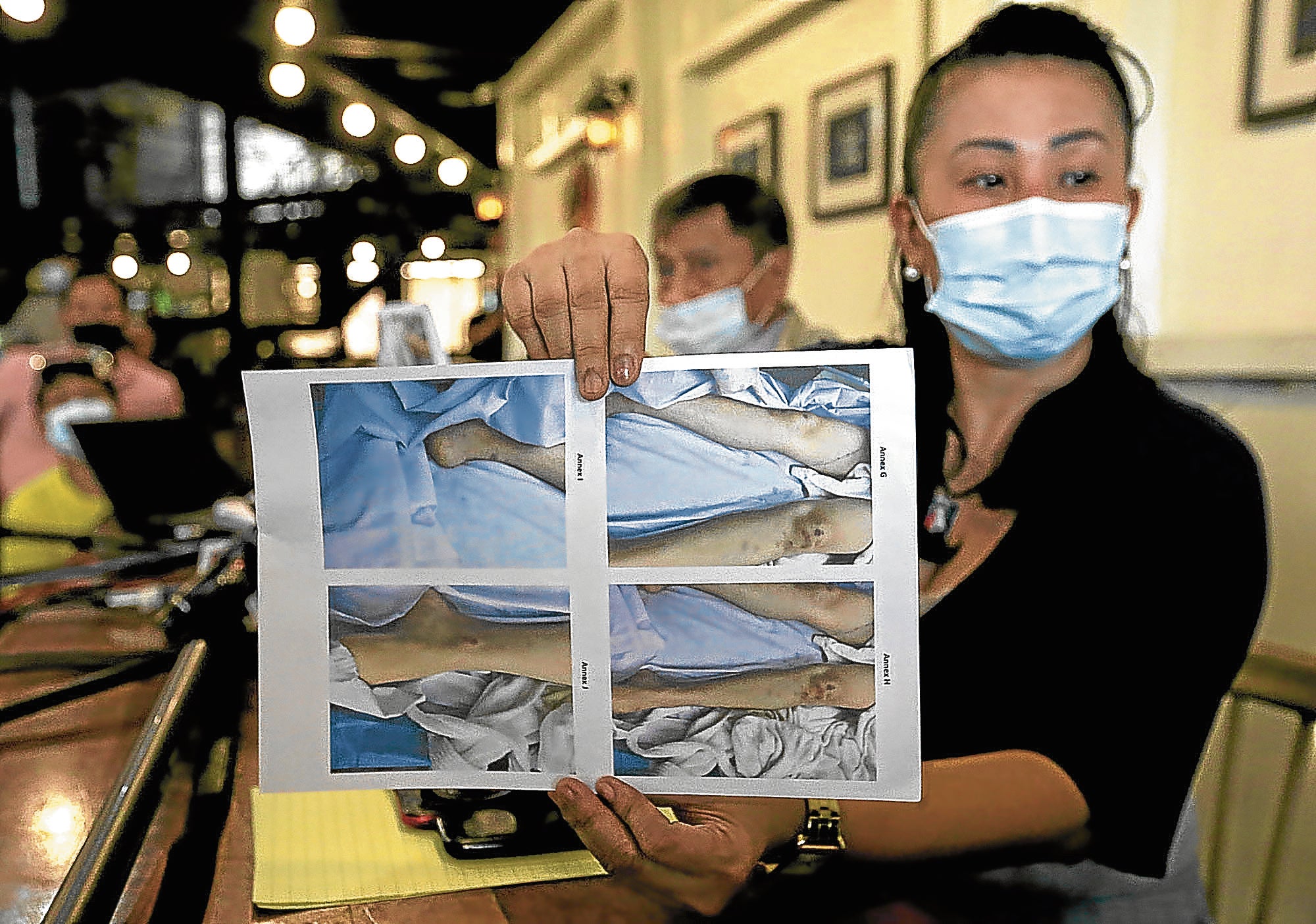 Based on the histopathology exam he conducted on parts of Dacera’s 18 organs, Police Lt. Col. Joseph Palmero, a doctor and medicolegal officer of the PNP-CLO, concluded that the young woman died from a ruptured aortic aneurysm.

“Manner of death as homicide was ruled out in Dacera’s case because the aortic aneurysm is considered a medical condition,” Palmero wrote in his opinion on the report dated Jan. 11. “Based on the available information on hand, the manner of death is classified as natural death.”

But Reyes said the family was puzzled as to how the PNP-CLO was able to examine parts of Dacera’s organs when her body was flown to General Santos City on Jan. 7 and buried on Jan. 10.

“[Palmero] examined parts of organs of the late Christine but definitely he never examined the body, he never conducted an autopsy. We do not even know how they were able to retain parts of her body, because they should have informed and [gotten] the consent of the family,” Reyes said.

At a press conference on Thursday, lawyers of five of the 11 respondents—Rommel Galido, Valentine Rosales, John Pascual dela Serna, Clark Rapinan and Gregorio Angelo Rafael de Guzman—said parts of Dacera’s organs were submitted to the PNP-CLO as early as Jan. 4.

Dacera partied with her friends at City Garden Hotel on New Year’s Eve. Her family believes her drink was spiked with drugs and she was sexually molested in Room 2209 or 2207, and that contributed to her death on Jan. 1.

Reyes said while the family did not want to prejudge the case, it was insisting that a crime was committed because of evidence indicating that Dacera was harmed.

He showed photos of Dacera’s bruises which, the family said, would prove she was “subjected to a form of violence before she died.”

The family is awaiting the results of the second autopsy conducted by the National Bureau of Investigation, which is also looking into the case.

Dacera’s friends who were named respondents in the case expressed hope that with the latest development in the investigation, the family would find peace.

Addressing their friend’s mother, Sharon Dacera, De Guzman said: “I hope this finally clears everything. I hope you find peace. And if you have, I hope you can help us find our peace and relief from this trauma and all this torture.”

But Sharon said on Friday that she remained in pain because justice was still elusive.

“I’m just knocking on their hearts. If you still have a conscience, tell the truth. It’s I who was bereaved; it’s I who lost a child. I’m just praying that whoever did this to my child would be bothered by his conscience.”

Mike Santiago, lawyer of the five respondents, said the medicolegal report was not “a mere opinion” but “a scientific finding of doctors.”

“These professionals will not release any report without basis. The medicolegal report was based on the autopsy conducted on the body,” Santiago said.

But Dr. Raquel Fortun, a forensic pathologist, said the latest PNP report was “frustrating,” “does not make sense,” and raised more questions on Dacera’s death.

“As a pathologist reviewing this report, I am not convinced [that the manner of death was natural],” Fortun said.