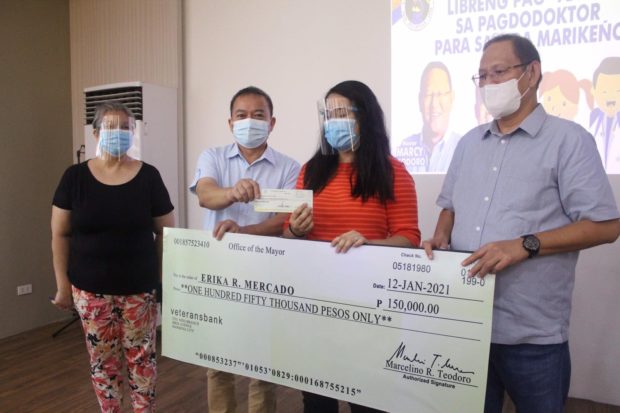 Marikina Mayor Marcelino Teodoro (right) with one of the beneficiaries of the scholarship grant. Photo courtesy of Marikina PIO

In a statement, Teodoro said two medical students living in Marikina were qualified for the gold scholarship grant, which provides P150,000 educational assistance. Educational aid includes funds for “transportation, allowances, board and lodging allowances, uniforms, textbooks, and other necessary supplies.”

(A lot of Marikina residents want to be a doctor but they are struggling financially. That’s why we are giving scholarships.)

The mayor said Mercado’s father suffered a stroke while her mom is currently a public school teacher in the city.

Meanwhile, Cobarrubias’ house was destroyed after it was ravaged by Typhoon Ulysses in November 2020. His parents are both working as online sellers.

The scholarship program stemmed from an ordinance signed in October 2019, which aims to provide scholarship to deserving Marikina residents who are enrolled in a medical program in Metro Manila schools.

Qualified students must “pass the entrance examination for medicine, a bona fide Marikina resident, not more than 30 years of age upon graduating from a pre-medicine course, and must send a letter of intent on availing of the scholarship grant.”