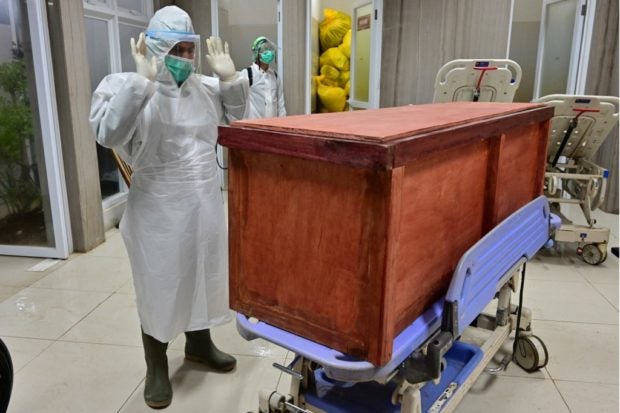 This picture taken on September 9, 2020 shows a hospital worker performing a Muslim funeral prayer over the coffin bearing the body of a patient who succumbed to the COVID-19 coronavirus, at the Bogor general hospital in Bogor, West Java.  (Photo by ADEK BERRY / AFP)

With vaccines seen as the only real chance of returning to some form of normality, a row erupted between the European Union and drugs firm AstraZeneca over supplies.

And in Lebanon, a third night of clashes was raging between police and anti-lockdown protesters, following similar violence in the Netherlands against a curfew this week.

“We are here to demand food. People are hungry,” said Mohammed Ezzedine, a 20-year-old protester in the Lebanese city of Tripoli. “It’s time for people to take to the streets.”

As fears escalate over highly infectious new strains of the coronavirus, governments introduced a slew of travel restrictions Wednesday.

Finland banned all but essential travel, while Norway announced a border shutdown to almost all non-residents as of Friday.

Portugal suspended all flights with Brazil — home to one of the new strains — and Israel shut off its land borders with Egypt and Jordan.

Those flying back must stay in hotels for 10 days at their own cost, interior minister Priti Patel told lawmakers.

‘The fight of our lives’

The pandemic has now claimed some 2.2 million lives since the virus emerged in China in late 2019.

But shutdowns of businesses and bans on group gatherings remain key to many governments’ strategies.

Some 16 million Peruvians are due to enter a two-week lockdown at the end of January, while the tiny southern African kingdom of Lesotho said it was prolonging its own shutdown over what Prime Minister Moeketsi Majoro said was a “very high and very dangerous” infection rate.

France is considering a third national lockdown, with its famed Cannes film festival postponed until July.

Hong Kong, meanwhile, has begun using “ambush lockdowns” to suddenly close off and test everyone inside neighbourhoods where cases have spiked.

Despite the widespread gloom, the WHO insisted Wednesday that all is not lost.

“We are in the fight of our lives. We have to make sure that we’re not fighting each other; that we’re fighting the virus,” said Maria Van Kerkhove, the WHO’s technical lead on Covid-19.

There have nonetheless been rising complaints of “vaccine nationalism” as countries compete to get hold of scarce supplies.

The EU is in a tense standoff with drugs company AstraZeneca after it told the bloc it could only supply a quarter of the doses previously promised for the first quarter of 2021.

The EU has demanded the firm supply doses from its UK factories, in a move that risks setting the EU and Britain on a post-Brexit collision course as they both insist on receiving promised supplies.

“That may work at the neighbourhood butcher’s but not in contracts, and not in our advanced purchase agreements.”

The row compounds the woes of Europe’s vaccine rollout, with many EU countries already facing delays in shipments of jabs made by Moderna and Pfizer-BioNTech.

Spain’s Madrid region said Wednesday that it was suspending new vaccines for at least two weeks due to shortages.

In the United States, the worst-hit country in the world, there was further proof of the huge blow the pandemic has struck to the economy.

The Federal Reserve warned that the economic recovery had lost steam in recent months, with Fed Chair Jerome Powell warning of a “highly uncertain” outlook.

White House spokeswoman Jen Psaki was meanwhile looking across to China, demanding a “robust and clear” international probe into the origins of the pandemic in the central city of Wuhan.

She told reporters it was “imperative we get to the bottom” of how the virus appeared and spread worldwide.

With a WHO team currently in Wuhan investigating the pandemic’s origins, relatives of coronavirus victims in the city say Chinese authorities have deleted their social media group and are pressuring them to keep quiet.