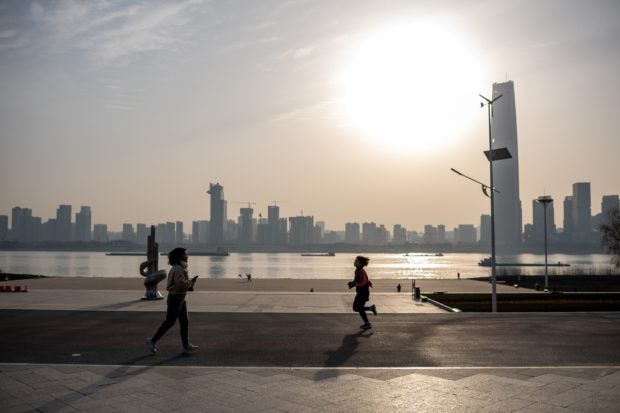 People run along the banks of the Yangtze River in Wuhan on January 11, 2021, as the city marks the first anniversary of when China confirmed its first death from the COVID-19 coronavirus. (Photo by NICOLAS ASFOURI / AFP)

Speaking to reporters, she said it was “imperative we get to the bottom” of how the virus appeared and spread worldwide.

Psaki highlighted “great concern” over “misinformation” from “some sources in China.”

The coronavirus has killed more than two million people, infected at least 100 million and hammered the global economy since first being detected about a year ago in the central Chinese city of Wuhan.

Earlier this month, a team of experts from the World Health Organization, or WHO, arrived in Wuhan after repeated delays to probe the virus’s origins.

Scientists agree that the disease has an animal origin and particular focus is on the Wuhan “wet market,” which sells live animals.

But former US president Donald Trump supported a theory that the virus could have instead originated in a lab at the Wuhan Institute of Virology, something China rejects.

Days before Trump left office this month, the State Department attacked the Chinese Communist Party’s “deadly obsession with secrecy and control.” It said that staff at the Wuhan lab had fallen sick with symptoms resembling Covid-19 in 2019, before any cases of the virus were made public.

Beijing has countered with arguments that although Wuhan is where the first cluster of cases was detected, it is not necessarily where the virus originated.

The government and state media have even tried to push conspiracy theories about a supposed link to a US biological weapons lab in Maryland.

Psaki said the new Biden government was devoting significant resources of its own to understanding what happened and would not take the WHO report for granted.

Washington will “draw on information collected and analyzed by our intelligence community” and also work with allies to evaluate the “credibility” of the international report.

In addition, the Biden administration intends to boost “our staffing on the ground in Beijing, which is something that fell back in the last administration.”

Read Next
Prepare for the next pandemic like a ‘war,’ says Bill Gates
EDITORS' PICK
Look Through: Super Typhoon Karding barrels through parts of Philippines
Motorcycles, smartphones, and cash prizes up for grabs in TNT’s ‘Tuloy Ang Saya’ Raffle in Mindanao
Do all the things you do, faster
POGOs not linked to Illegal online gaming, says Pagcor
House energy committee chair Arroyo bats for cheap electricity
Metro Manila now at moderate risk for COVID-19 — DOH
MOST READ
Robredo supporter tackles elephant in room: No massive fraud in 2022 polls, surveys were just right
Comelec invalidates win of sitting governor in Negros Oriental
DepEd: We are in a crisis situation in education sector
Lives destroyed as armyworms invade Philippine ‘onion capital’
Don't miss out on the latest news and information.