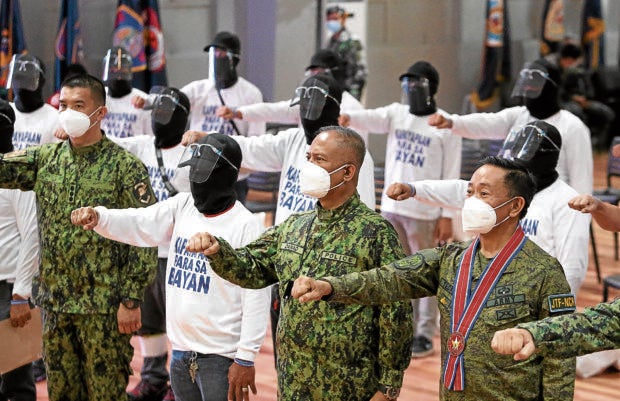 MANILA, Philippines — Metro Manila’s police chief on Tuesday welcomed some 30 alleged rebels who returned to the fold of the law after years of supposedly giving part of their earnings to the Communist Party of the Philippines-New People’s Army (CPP-NPA). The surrenderers, who were all wearing masks, were inducted into the government’s Enhanced Comprehensive Local Integration Program (E-Clip) so they could become eligible to receive financial and livelihood assistance.

They also took the oath of allegiance to the republic in a program held at the regional police headquarters in Camp Bagong Diwa, Taguig City.

They came from Metro Manila and other regions who were convinced to surrender, Danao said. Most of them, he claimed, were fed up with the CPP-NPA’s monthly collection of 10 percent from their salaries.

“They are working hard on their jobs, and yet they are forced to give 10 percent of their salaries every month. So they were the milking cows [of the communist rebels],” he said.

They and their families will also be provided a halfway house, medical aid and enrollment in Philippine Health Insurance Corp., as well as education, housing and legal assistance.

Danao said the closure of companies they worked for would be highly favorable for the CPP-NPA because “they would be asking [for] 25 percent of what the workers would receive.”

He encouraged communist rebels to surrender and avail themselves of the E-Clip program so they could reintegrate in mainstream society. —JEANNETTE I. ANDRADE INQ

Read Next
DOF chief: Open PH economy to foreigners, but not land
EDITORS' PICK
Smart introduces Smart Barkada with the launch of Double GIGA
Duterte defends govt’s efforts vs COVID in 2020
Duterte: Authorities may take over hotels, but it’s not a ‘remedy’ in a democracy
When will PH get enough COVID-19 vaccines? ‘I really don’t know,’ Duterte says
LT Group, Inc. Notice of Annual Shareholders’ Meeting 2/2
Smart is fastest 5G Network in PH – Ookla
MOST READ
‘Duterte a total failure as leader. He must step down’ – group
Duterte ‘privately’ dealing with China invasion in West PH Sea – Palace
Ramon Tulfo says gov’t running PH like a ‘headless chicken’
Stop acting like a colonizer, PH business groups tell China
Don't miss out on the latest news and information.