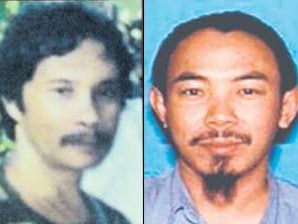 Using 227-kilogram bombs in an air attack that lasted only “a few seconds,” government warplanes on Thursday killed one of Southeast Asia’s most-wanted terrorist leaders, as well as a senior Abu Sayyaf commander and a Singaporean guerrilla.

AFP Chief of Staff General Jessie Dellosa said the one-sortie, 3 a.m. operation occurred in the village of Duyan Kabaw in Parang, Sulu province. Also killed were 12 of the followers of the three terror leaders.

Asked for proof that 15 terrorists were killed, Dellosa said: “I am sure because I will not easily issue a statement here.”

“You know our brothers out there, they get the bodies quickly so they can be buried,” he said, in Filipino.

Dellosa said he had strong basis for his report. “We have intelligence people and locals in the area,” he said.

One of those killed was  Malaysian Zulkifli bin Hir, also  known as “Marwan” and a top leader of the al-Qaeda-linked Jemaah Islamiyah (JI) regional terror network. He carried a $5-million bounty on his head.

Also killed was Abu Sayyaf Group (ASG) commander Umbra Jumdail, known as “Doc Abu,” who had a bounty of P7.4 million put up by the Philippine government, on top of a $140,000 reward offered by the US Department of State.

The slain Singaporean was identified by the military as Muhamda Ali, alias “Mauwiya Anjala,” of JI, who had a bounty of $50,000.

The operation was  “based on a thorough, well-executed plan and months of continuous monitoring and surveillance of JI and ASG personalities,”  Armed Forces of the Philippines (AFP) spokesperson Colonel Arnulfo Marcelo Burgos Jr. said in a briefing at Camp Aguinaldo.

“The air strikes by two OV-10 Broncos took only seconds,” he said, adding the targets had no chance to retaliate. At the time, intelligence reports put the number of terrorists on the ground at 30, he said.

The rest of the group escaped and no one was captured after the attack, the military said.

The terrorists were found in a thickly vegetated area under the cover of coconut trees.

“As per the description of the operation officer,  there were coconut trees, the area was thick and there were tents. They were probably sleeping,” Burgos said.

“The troops on the ground confirmed the deaths of 15 ASG and JI members,” Burgos said. He said no civilians were killed in the attack.

He said the AFP information came from “civilian informers who cooperated with us in our all-out-justice campaign.”

Asked if the United States was involved, he said: “The US has been providing us assistance in terms of intelligence and in terms of technology. What was important was the intelligence provided to us in this case.”

Burgos said intelligence reports had indicated six JI personalities entered the Philippines last December but the military was still checking how many remained.

“This is a terrific blow, a big blow, against the Abu Sayyaf and Jemaah Islamiyah,”  Burgos said.

Asked if there was a need for DNA tests, Burgos said the Philippine National Police had “confirmed” the identities of the three terrorist personalities. The names of the 12 others were not yet available, he said.

The three were “positively identified by police and our intelligence informants at the site,” Burgos told The Associated Press.

In October last year, the military also launched a bomb run in Indanan town in Sulu targeting the same group.

“No one was hurt or killed from our side and there was no collateral damage in civilian communities,” Coballes said.

The JI, which operates in Indonesia, Malaysia and Thailand, is believed to have links to the international al-Qaeda terror network.

Marwan, a US-trained engineer, was wanted for his alleged role in several terror attacks.  He was also said to have trained new guerrillas in the Philippines.

Jumdail, called Doc Abu for serving as a medic during the Abu Sayyaf’s early years, was wanted for involvement in numerous kidnappings, including the 2009 abduction of International Committee of the Red Cross personnel in Sulu  and in the May 2001 kidnapping of Filipinos and foreigners in the Dos Palmas resort in Palawan province.

American counterterrorism troops have helped the ill-equipped Filipino troops track Marwan for years using satellite and drone surveillance. About 600 US Special Forces troops have been deployed in Mindanao since 2002, providing a crucial support for the Philippines’ counterterrorism operations.

Pending confirmation by DNA testing, Marwan’s death may represent the most important successful operation against JI since the January 2011 arrest of Indonesian suspect Umar Patek in Pakistan’s garrison town of Abbottabad, where Osama bin Laden was killed in a US commando attack four months later.

Patek and Marwan collaborated with the Abu Sayyaf in training guerrillas in bomb-making skills, seeking funding locally and abroad and plotting attacks, including against American troops in the southern Philippines.

Patek is believed to have traveled back to Indonesia then onward to Pakistan, leaving Marwan to take charge in the southern Philippines, military officials say.

Thursday’s attack also represents a huge blow to the Abu Sayyaf’s ability to recover from years of battle setbacks through fund-raising and training of new guerrillas.

The group is behind numerous ransom kidnappings, bomb attacks and beheadings that have terrorized the Philippines for more than two decades.

US-backed offensives have been credited for the capture and killing of hundreds of Abu Sayyaf fighters and most top leaders since the 1990s. Jumdail had eluded troops in numerous offensives and emerged as a key figure in the radical movement.

The military estimates the Abu Sayyaf strength at about 400. They are still considered a key threat to regional security.

They are believed to be still holding a former Australian soldier who was kidnapped before Christmas, as well as a Malaysian, a Japanese and an Indian. With a report from AP and Inquirer Research