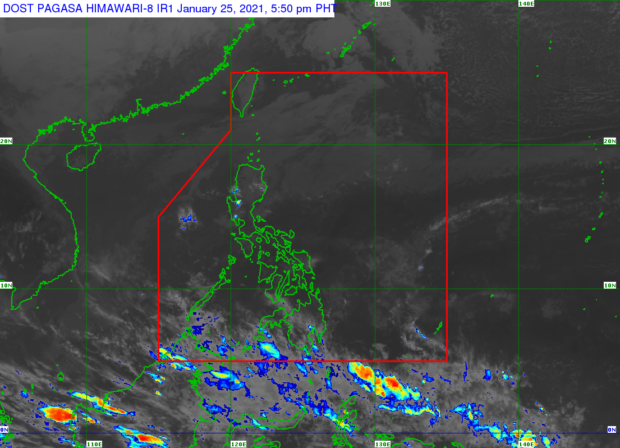 MANILA, Philippines — Overcast skies and rainshowers will still prevail over most parts of northern and central Luzon from Monday night until Tuesday, the Philippine Atmospheric, Geophysical and Astronomical Services Administration (Pagasa) said.

Pagasa’s bulletin released on Monday afternoon showed that the tail end of a frontal system and the northeast monsoon or amihan remain responsible for the gloomy weather experienced in Ilocos Region, Cordillera Administrative Region, Cagayan Valley, and Central Luzon.

But conditions were likely to start improving down south, from Metro Manila towards southern Luzon, as state meteorologists said they expect partly cloudy to fair weather in these areas in the coming days.

Despite warmer weather in the past few days, Pagasa said the country can still expect a fresh surge of amihan starting in the middle of the week as forecasts show wind patterns generally coming from the northeastern portion.

(We have observed that basically, the prevailing wind patterns for the next two to three days would come from the northeast.)

(Actually, we are expecting a fresh surge of the northeast monsoon by the middle of the week up to Saturday or the next weekend.  People can expect to experience colder early mornings and even cold daytime temperatures again, over most parts of Northern Luzon and other areas in Central and Southern Luzon.)

On the other hand, warm and humid weather may prevail over Visayas and Mindanao although Pagasa warned of possible isolated rains by Tuesday afternoon and night. Temperatures over Cebu, Iloilo, Tacloban, and Davao will likely play between 25 and 32 degrees Celsius, Zamboanga around 25 to 34 degrees Celsius, and Cagayan de Oro at 25 to 32 degrees Celsius.

Wind patterns also show that no low-pressure area or tropical cyclone is expected in the coming days, Pagasa said.

Pagasa also warned sea conditions over the northern, eastern, and western seaboards of Luzon will be moderate to rough, as it will be moderate over the eastern waters of Visayas and Mindanao, and slight to moderate for the rest of the country’s seaboards.