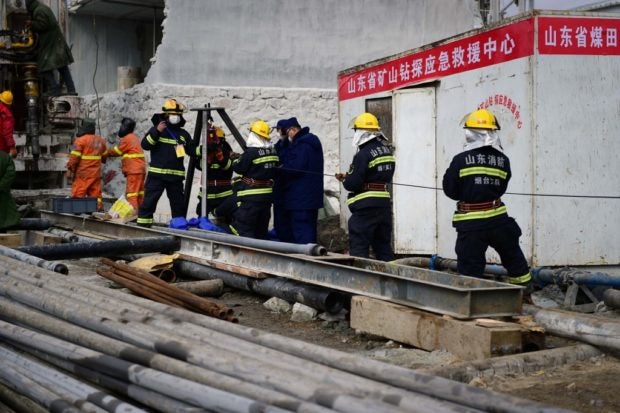 This photo taken on January 20, 2021 shows members of a rescue team working at the site of a gold mine explosion where 22 miners are trapped underground in Qixia, in eastern China’s Shandong province. Photo by STR / various sources / AFP

BEIJING — Rescue workers on Sunday lifted out the first of 22 miners trapped for two weeks hundreds of meters underground in an east China mine, state broadcaster CCTV reported.

The man, discovered Sunday in a separate section of the mine to the 10 workers who had already established contact with rescuers, was in “extremely weak physical condition”, CCTV said.

Rescuers have been battling difficult conditions to help the workers since an underground explosion at the Hushan mine in Shandong province sealed them underground amid rising waters on January 10.

State broadcaster footage showed a small elevator carriage lifted to the surface by a huge drill, accompanied by rescue workers. A masked man, who appeared unable to stand, was carried out.

Contact was first established a week ago with a group of 11 miners trapped in a section of the mine around 580 meters (1,900 feet) below the surface.

One of them was seriously injured in the initial explosion and has been confirmed dead after suffering head injuries and falling into a coma.

Rescue teams have been lowering food, medicine and other supplies through several “lifeline” shafts drilled into the rock. Life detectors and nutrient solutions have been lowered to other parts of the mine to find the other missing miners.

The rescued miner was found in a section closer to the surface than the section where the first group are located, CCTV reported.

A twelfth miner is believed to be trapped on his own, 100 meters further down in rising waters.

For the other nine miners, hopes are dwindling as they have not been heard from since the explosion.

Rescue workers said Friday it could take at least another two weeks to free the miners, citing a massive blockage that has delayed drilling efforts, according to state media.

Rescuers are trying to widen one of the shafts to eventually allow the workers to be brought up to the surface.

Mining accidents are common in China, where the industry has a poor safety record and regulations are often weakly enforced.

In December, 23 workers died after becoming stuck underground in the southwestern city of Chongqing.