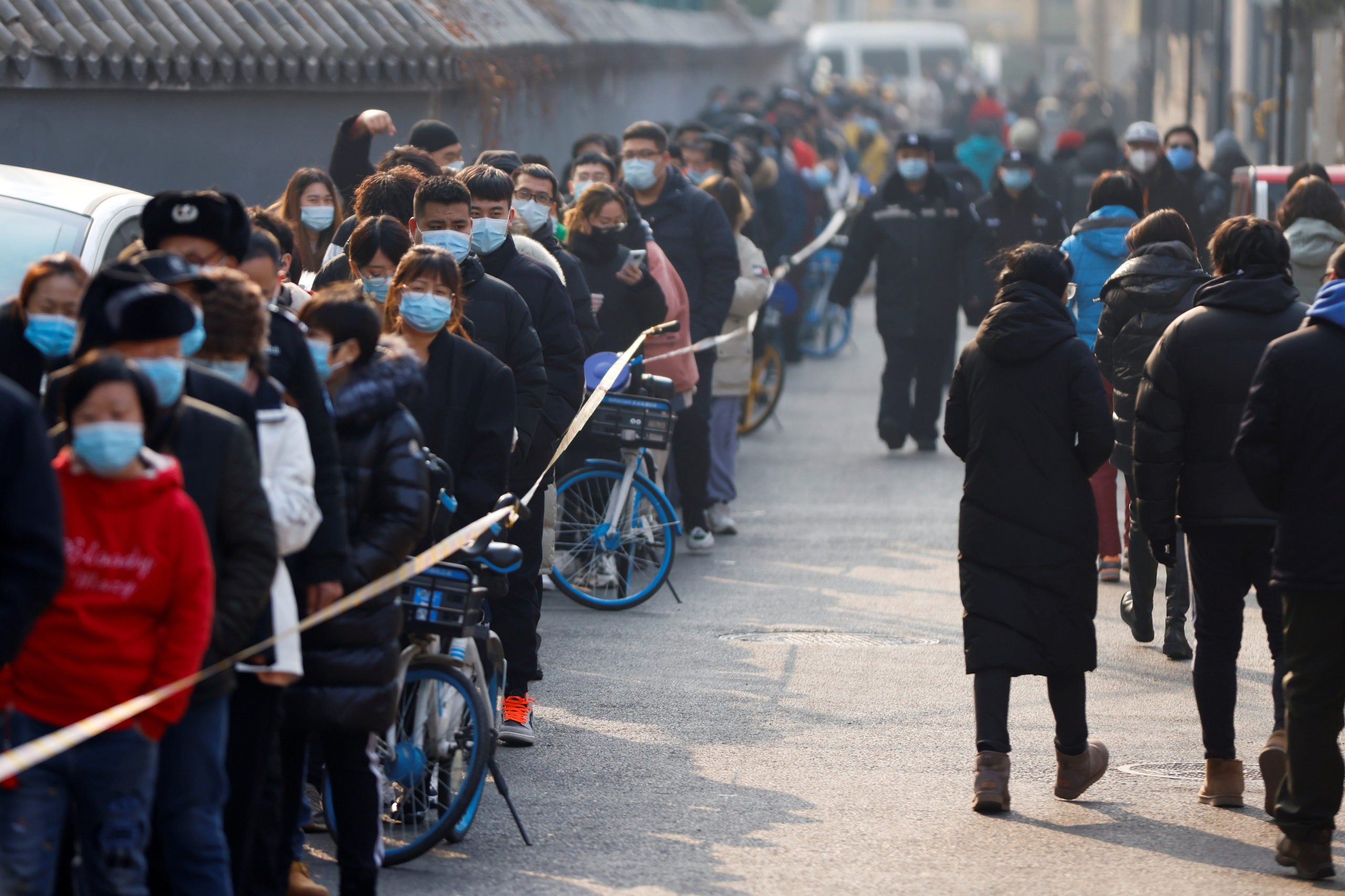 People line up to get their nucleic acid test following the outbreak of the coronavirus disease (COVID-19) in Beijing, China January 22, 2021. REUTERS/Carlos Garcia Rawlins

BEIJING— Beijing launched mass COVID-19 testing in some areas on Friday and Shanghai was testing all hospital staff as China battles its worst outbreak of the disease since March, with families fretting over Lunar New Year reunion plans amid new curbs.

Long queues formed in some districts in Beijing, where mass testing was launched following several consecutive days of new cases. City officials said there were some “leaks” in epidemic control in some rural areas, with inadequate adherence to rules on wearing masks, social distancing and temperature checks.

A queue more than 200 meters long built up outside Dengshikou Elementary School, a testing spot near the city center. A man surnamed Lin said the supermarket he works at had told him to get a test.

“I’m not that worried though this round of the outbreak is a bit unexpected. I came as my work unit told me to,” he said.

Shanghai began testing all hospital staff for the disease on Thursday after two such workers tested positive.

Almost all of the local transmissions and asymptomatic cases in Harbin, the capital of Heilongjiang province, were linked to a meat processing plant owned by a joint venture between Thailand’s top agro-industrial conglomerate, CP Group, and a development zone.

Tens of millions of people have been under some kind of lockdown in northern cities amid worries that undetected infections could spread quickly during the Lunar New Year holiday in mid-February.

Hundreds of millions of people usually travel during the holiday, as migrant workers return to their home provinces to see family. Officials expect large numbers of travelers, although many fewer than in normal years.

The northern port city of Tianjin said on Friday that all domestic arrivals would have to present a negative COVID-19 test and be subject to 14 days of home observation.

Hebei province, next to Beijing, reported 18 new locally transmitted cases. At the high-speed railway station in its largest city, Shijiazhuang, passengers were allowed to get off a train on Friday but none were seen getting on.

“I’ve never been separated from my daughter over New Year before,” said a woman surnamed Hao, in Shijiazhuang taking care of her mother.

She said she had been told by her neighborhood she was not allowed to return to Beijing, where the rest of her family are. She hoped restrictions would be lifted in time for them to reunite over the festival.

She said she was determined to get back to Beijing to be with her daughter and her father was in a nursing home there that no longer allowed visitors.

The capital’s west train station, which normally sees vast numbers of passengers in the run-up to the Lunar New Year, was virtually empty on Friday morning.

The number of new asymptomatic cases, which China does not classify as confirmed cases, rose to 119 from 113 cases a day earlier.

The total number of confirmed COVID-19 cases in mainland China now stands at 88,804, while the death toll remained unchanged at 4,635.