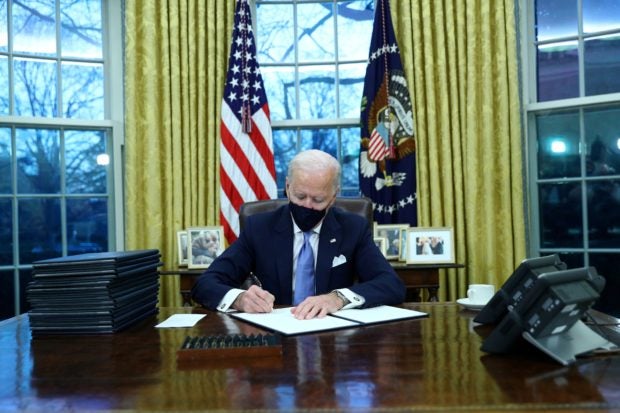 ‘NOTIMETOWASTE’ US President Joe Biden begins his term by signing 15 executive actions shortly after entering the White House on Wednesday afternoon (January 20, 2021) to set a new course and overturn some of his predecessor’s most controversial policies. —REUTERS

WASHINGTON — It was a bold opening salvo from the incoming administration of President Joe Biden: an immigration bill that would open a path to citizenship for roughly 11 million people living in the country illegally. But even the Democratic senator leading the charge acknowledged on Thursday that passing it would be “a Herculean task.”

The senator, long-time immigrant rights champion Robert Menendez, said in a video call with business groups, labor unions, and migrant advocates that they will need to convince a broad swath of Americans to support the measure, while allies in the U.S. business community would have to push for it with “everything that you’ve got.”

Biden has made the immigration reform bill the centerpiece of his efforts to reverse former President Donald Trump’s hardline immigration legacy. It signals his willingness to spend significant political capital on an issue that is a priority for businesses, labor unions, faith groups, and activists.

In addition to the legalization measures for qualifying immigrants, the proposed bill would allow certain immigrants who were deported during the Trump administration to apply to return to reunite with family or for other humanitarian reasons. The proposal also raises the number of available legal work visas.

Biden, who took office on Wednesday, faces long odds, however, to win over enough Republicans in a closely divided Congress to pass the bill, congressional aides, experts and advocates told Reuters.

The Biden administration released a summary of the bill on Wednesday, but the text – which is expected to be hundreds of pages – has not been made public.

Menendez said Biden was committed to passing immigration reform and that he would not have backed the measure if it was purely a symbolic statement of Biden’s position.

“If I thought that this was just a messaging bill that was going to go absolutely nowhere, then I wouldn’t have lent my name to it,” Menendez said. “Having said that, yes, this will be tough.”

Control of the Senate is split 50-50, with Vice President Kamala Harris as the tie-breaking vote. Democrats would need to win over 10 Republicans to avoid a “filibuster,” a procedural hurdle that can delay or block legislation from coming to a vote.

Democrats control the House of Representatives, but by a narrower margin than in the previous Congress.

The challenges in the divided Senate are already on display as Democrats and Republicans negotiate the terms of their power-sharing agreement. Mitch McConnell, the Senate’s top Republican, is seeking assurances that the Senate will retain the filibuster, according to his office.

White House Press Secretary Jen Psaki said during a briefing on Thursday that the administration was hopeful Biden’s bill would provide “a moment of reset” that could restart discussions among lawmakers.

Republican Senator Tom Cotton of Arkansas tweeted on Monday – before Biden was sworn in – that the new president was “wasting no time trying to enact his radical immigration agenda.” He called the bill “total amnesty” with “no regard for the health or security of Americans, and zero enforcement.”

Senator Marco Rubio of Florida, who was involved in bipartisan immigration reform talks in 2013 before ultimately abandoning the effort, called Biden’s bill a “non-starter” in a statement this week.

Senate Majority Whip Dick Durbin told reporters at the Capitol on Thursday that he had “reached out to half a dozen Republicans on immigration and they’ve been open to the conversation.”

Another option would be to attempt to eliminate the filibuster or use other procedural moves to pass a bill with only 51 votes, he said.

Alex Conant, a Republican strategist who worked as a spokesman for Rubio during the immigration talks in 2013, said the bill does not appear likely to win over Republicans, but could evolve into a more palatable proposal.

Reuters/Ipsos polling show support for offering a path to citizenship for immigrants in the country illegally has risen since 2014, with 60% of Americans in favor of it in a survey in February last year.

Some advocates argue Americans are now more aware of contributions by immigrant workers because of the pandemic.

“Who stepped up to the plate when we were all locked in our houses and who put their lives on the line?” said immigration attorney David Leopold, who served as a volunteer adviser to the Biden campaign. “Undocumented workers.”