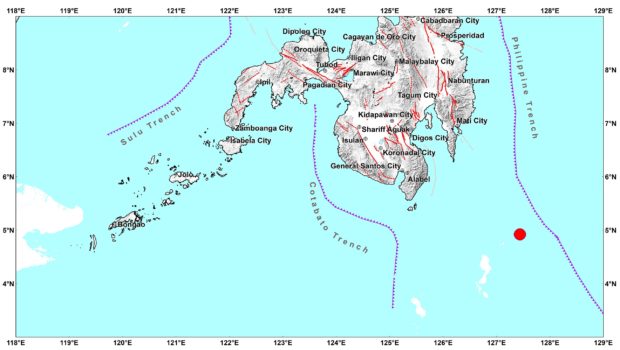 MANILA, Philippines — A 7.1 magnitude quake jolted a large part of Mindanao and was felt as far as Zamboanga City at 8:23 p.m. Thursday, sending people out of houses and buildings here, most of them not wearing their face masks.

A bulletin from the Philippine Institute of Volcanology and Seismology (Phivolcs) disclosed that the epicenter of the quake was traced at 231 kilometers southeast of Jose Abad Santos town in Davao Occidental.

The quake, which was tectonic in origin and had a depth of focus of 116 kilometers, came more than a year after the series of destructive quakes that displaced thousands in Mindanao from October to December 2019.

Other Instrumental Intensities were also felt in the following:

“Almost the entire Mindanao shook after almost five seconds of tremor,” said Engr. Allan Rommel Labayog, analyst of Phivolcs in Zamboanga City, where the quake was felt at Intensity 3.

The quake was felt at Intensity 5 in General Santos City and Kiamba; at Intensity 4 in Davao City, Alabel, Koronadal, Sarangani; and at Intensity 3 in Gingoog, Misamis Oriental and Bislig, Surigao del Sur, aside from Zamboanga City.

“(There are n)o reported damages but we are expecting aftershocks,” Labayog said. With reports from Julie Alipala, Germelina Lacorte, Inquirer Mindanao