WASHINGTON — Amanda Gorman, the youngest poet in U.S. history to mark the transition of presidential power, offered a hopeful vision for a deeply divided country on Wednesday with her poem “The Hill We Climb.”

“Being American is more than a pride we inherit. It’s the past we step into and how we repair it,” Gorman said, in a short poem that was greeted with a hail of critical acclaim on social media. 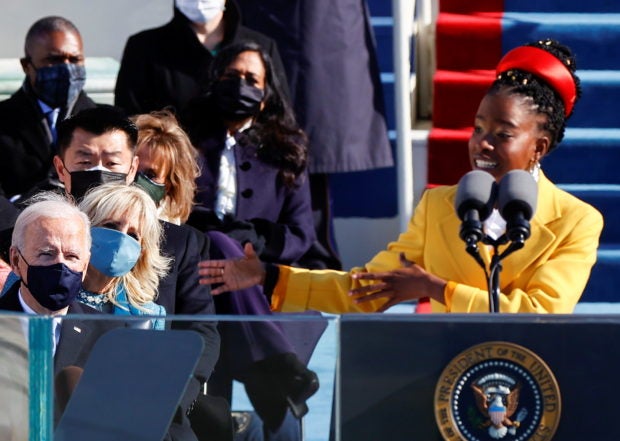 U.S. President Joe Biden listens as Amanda Gorman recites a poem during his inauguration as the 46th President of the United States on the West Front of the U.S. Capitol in Washington, U.S., January 20, 2021. REUTERS/Jim Bourg

“We will not march back to what was. We move to what shall be, a country that is bruised, but whole. Benevolent, but bold. Fierce and free.”

Speaking on the steps of the U.S. Capitol just two weeks after a violent mob laid siege to the seat of the American government with Confederate flags, pipe bombs, and a noose, Gorman said Americans could rise above the hatred.

“While democracy can be temporarily delayed, it can never be permanently defeated,” Gorman said. “Let us leave behind a country better than the one we were left,” Gorman said. “We will raise this wounded world into a wondrous one.”

“The new dawn blooms as we free it,” said Gorman, who was named the first U.S. National Youth Poet Laureate in 2017. 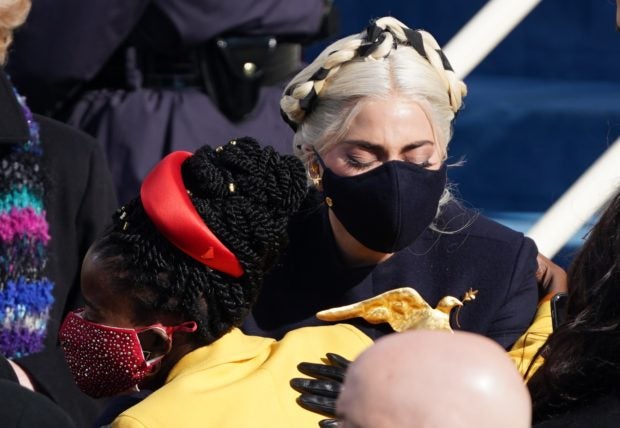 Lady Gaga embraces Amanda Gorman during the inauguration of Joe Biden as the 46th President of the United States on the West Front of the U.S. Capitol in Washington, U.S., January 20, 2021. REUTERS/Kevin Lamarque

Critical acclaim poured from across the country and the political spectrum, including Republican strategist Lincoln Project and Stacey Abrams, the Democratic organizer and gubernatorial candidate from Georgia, who said, “Amanda Gorman’s message serves as an inspiration to us all.”

Singer Sheryl Crow tweeted: “If the future looks like inaugural poet laureate Amanda Gorman, we are in good shape. Wise and inspiring.”