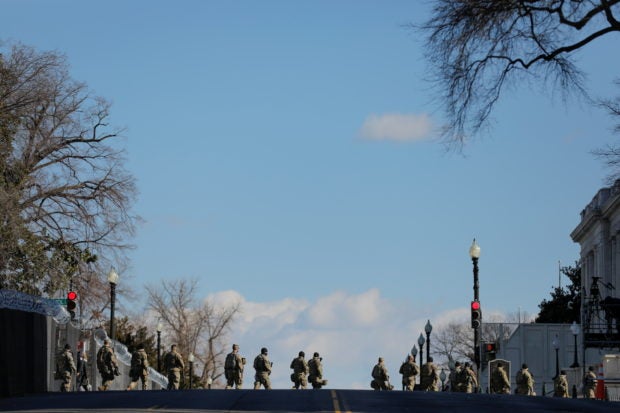 WASHINGTON — A dozen members of the U.S. National Guard have been removed from duty helping secure the inauguration of President-elect Joe Biden after vetting, which included screening for potential ties to right-wing extremism, Pentagon officials said on Tuesday.

A Pentagon spokesman said the vetting went beyond ties to extremist groups. One Guard member was removed from duty after troubling text messages and another had been reported to a tip line, Army General Daniel Hokanson, chief of the National Guard Bureau, told reporters.

“We are, out of an abundance of caution, taking action and immediately removing them from the line of duty at the Capitol and the events taking place,” said Pentagon spokesman Jonathan Hoffman.

On Sunday, acting Defense Secretary Chris Miller said the FBI was assisting the U.S. military in vetting more than 25,000 National Guard troops being deployed to assist in protecting the U.S. Capitol for potential security concerns ahead of Wednesday’s inauguration of Biden.

The vetting has been going on since last week, and the FBI is also working to see if any current service members took part in the Jan. 6 riot at the U.S. Capitol by supporters of outgoing President Donald Trump.

Last week, the Virginia National Guard said that Jacob Fracker, an off-duty police officer charged in connection with the violent riots at the Capitol, was a corporal in the state’s Guard and serves as an infantryman.