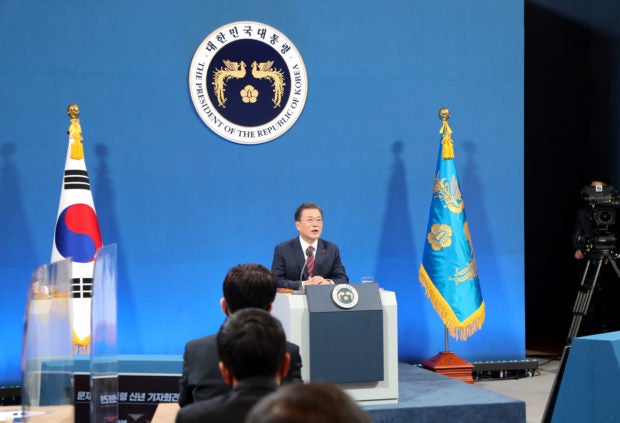 SEOUL — President Moon Jae-in forecast Monday that South Korea will be able to achieve the formation of collective herd immunity against the new coronavirus faster than other countries under the government’s inoculation program.

Moon said he predicts the country will achieve complete herd immunity no later than late November.

“By beginning from February, we plan to complete preliminary vaccinations by September. I believe we will be able to reach a general level of herd immunity by then,” Moon said.

The president said the secondary phase of national inoculation, centered around those who hadn’t had the chance to be vaccinated, will be carried out in the fourth quarter.

Moon also cautiously projected that the government’s inoculation time schedule could be sped up if shipments from the World Health Organization’s global vaccine project, known as COVAX, arrive earlier than expected.

“There is a possibility that the shipments from COVAX could arrive the earliest. I’ve been briefed that the vaccine shipment inoculation period could be sped up if that is the case,” Moon said. (Yonhap)

Read Next
Sinulog contingents seek refund for expenses
EDITORS' PICK
Giant clams worth P160M seized in Palawan raid
Nestlé Philippines’ ‘NESCAFÉ Plan’ bags Grand Anvil at PRSP 56th Anvil Awards
Every Filipino home can now be a smart home with realme TechLife
So: I lacked connections to succeed in PH ‘culture’
New variants suspected in surge of Covid-19 cases
Smart reinforces superiority with best speed and mobile video experience in PH
MOST READ
How to lose a Filipino genius: Wesley So officially a US citizen
US lays out list of aid to ‘satisfy’ Duterte following VFA payment demand
So: I lacked connections to succeed in PH ‘culture’
Robredo on Sara Duterte leading poll surveys: Why are Filipinos drawn to leadership of this kind?
Don't miss out on the latest news and information.