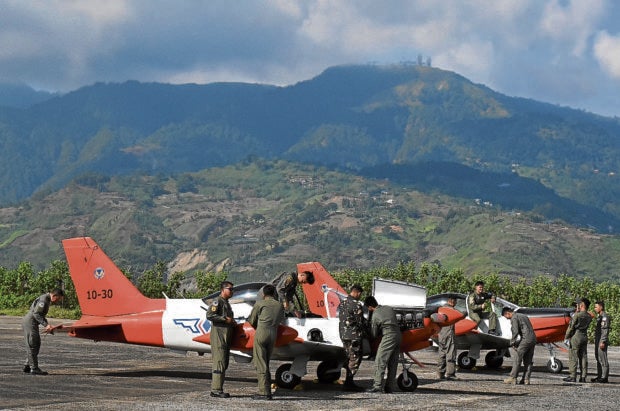 SOON TO REOPEN In this photo taken in October last year, Philippine Air Force (PAF) pilots undergo aerial maneuver training at Loakan airport in Baguio City for the first time in 14 years. PAF trainees stopped using the airfield, built in 1934, after a fatal accident in 2005. The airfield is being readied for commercial flights. —EV ESPIRITU

BAGUIO CITY—An airline company will conduct test flights from Manila to Baguio’s Loakan airport this month as the city prepares for the resumption of commercial flights, officials said on Saturday.

Philippine Airlines (PAL) Express has already started evaluating and assessing the safety requirements of Loakan located near the Philippine Military Academy, said Mayor Benjamin Magalong. The city government will remove structures and trees obstructing the landing of aircraft, he said.

In January last year, the city buildings and architecture office issued demolition notices to about 200 owners of houses and other structures within the airport’s 150-meter buffer zone.

The clearing operation was part of the airport’s upgrade as stipulated by the Civil Aviation Authority of the Philippines (Caap).

“The resumption of [commercial] flights … will play a key role in convincing high-end tourists to prioritize Baguio City as one of their preferred destinations,” Magalong said in a statement.

He said the flights would help speed up revival of the local tourism industry that was still reeling from the impact of community quarantine due to the coronavirus pandemic.

The mayor said he was hoping that PAL Express could sustain its regular Baguio-Manila flights.

In 2009, airline companies servicing this route stopped their flights after raising safety issues and the lack of landing instruments in the airport.

Currently, Loakan is open to chartered and military flights. It has a 1.6-m runway, which is among the shortest in the country but enough to cater to taxi and takeoff requirements of small aircraft. —KIMBERLIE QUITASOL INQ