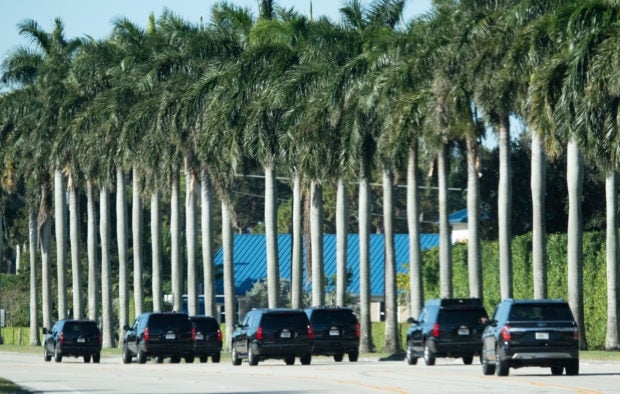 In this file photo taken on December 27, 2020 the motorcade of US President Donald Trump arrives at Trump International Golf Club in West Palm Beach, Florida. – President Donald Trump will leave Washington in disgrace next week, destined for a warmer welcome in Florida, where some supporters are so gung-ho they recently wrote his name on the back of a fat, lumbering manatee. (Photo by SAUL LOEB / AFP)

MIAMI – President Donald Trump will leave Washington in disgrace next week, destined for a warmer welcome in Florida, where some supporters are so gung-ho they recently wrote his name on the back of a fat, lumbering manatee.

Days after suffering the ignominy of a second impeachment, Trump will skip his successor Joe Biden’s inauguration and depart early Wednesday for his Mar-a-Lago resort in Palm Beach, Florida. Apparently, he plans to live there.

There are also signs his adult children will decamp south to be near their father, who was cut off from Twitter and other social networks that were his megaphone after being widely accused of instigating the January 6 assault by his supporters on the US Capitol.

Locals can already be heard whispering, angrily, “There goes the neighborhood.” They are not happy with the prospect of Trump settling among them. 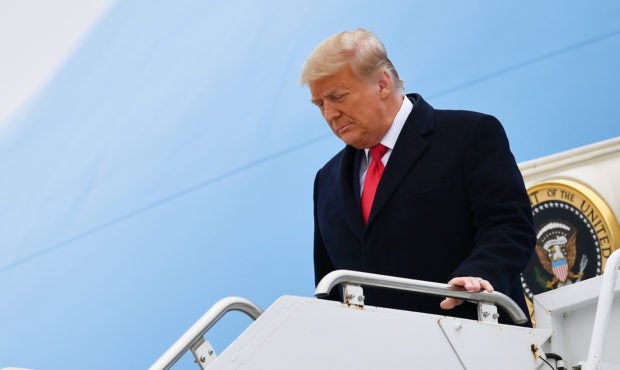 US President Donald Trump stepping off Air Force One upon arrival in Harlingen, Texas, on January 12, 2021. – Trump on January 13, 2021, became the first US president to be impeached for a second time, when a bipartisan majority in the House of Representatives voted to charge him with inciting last week’s attack on the US Capitol. One week before Trump is to leave office, a total of 232 lawmakers, including 10 Republicans who broke with the president, voted to impeach the defiant Republican leader for high crimes and misdemeanors on a single charge of “incitement of insurrection.” (Photo by MANDEL NGAN / AFP)

Last month people in Palm Beach sent the city council a letter recalling that under a 1993 agreement, Mar-a-Lago was not zoned as a full-time residence.

That letter, published by The Washington Post, states that use of the living quarters at the golf resort “shall be limited to a maximum of three (3) non-consecutive seven (7) day periods by any one member during the year.”

The resort denies that the 1993 accord contains this restriction.

The Post noted that the president already spends large amounts of time at the resort in violation of this rule, and he is expected to put up a fight against those who do not want him around.

But that’s only the beginning of Trump’s Mar-a-Lago woes.

This week Palm Beach County officials issued the resort a warning over a New Year’s Eve party at which guests did not wear masks or observe social distancing rules.

The county warned that any future violation of pandemic restrictions would mean a fine of $15,000.

“The Trumps may be surprised to learn that the voter rolls in the three main South Florida counties — Palm Beach, Broward and Miami-Dade — are dominated by Democrats,” said Craig Pittman, a Florida native and the author of five books on the state. 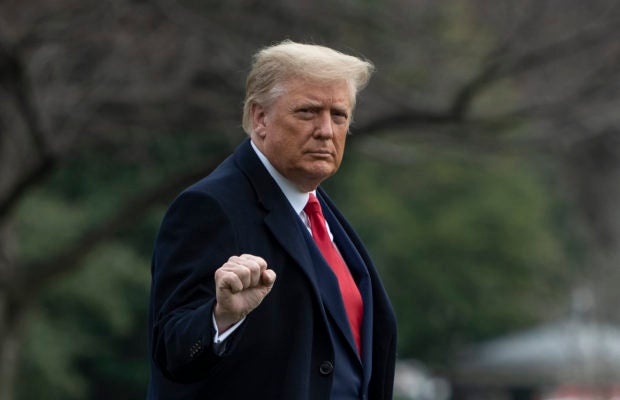 “In fact, the congressional representative for the district that covers Mar-A-Lago, Lois Frankel, has voted not once but twice to impeach her most famous constituent,” Pittman said.

Still, over the past four years Trump has built up a solid base of support in Florida, mainly among non-urban white people and conservative Latinos.

One of his most loyal followers is Miami Cuban-American Enrique Tarrio, a leader of the right-wing Proud Boys group.

Trump’s support is so strong in Florida that last Sunday a live manatee was found with “Trump” etched onto its back.

But after the assault on Congress, Trump is on thin ice.

Al Cardenas, former chairman of the Republican Party in Florida, told the Tampa Bay Times that Republicans in the state are terrified of losing the support of people who back Trump.

Dozens of Trump supporters rallied outside the Miami home of Republican Senator Marco Rubio, calling him a traitor for his support in Congress to certify Biden’s win and reject Trump’s baseless allegations that the election was rigged.

With the Trump family’s arrival, the US gossip press will be busy.

Chatter for now is centering on Tiffany Trump, the president’s 27-year-old daughter, who according to the tabloid Page Six is shopping for a house while she lives in South Beach.

The same news outlet reported last month that Ivanka Trump and her husband, Jared Kushner, an advisor to the president, have bought a $30 million lot in Indian Creek Village, an island north of Miami Beach known to be one of the most expensive places in the country.

Donald Trump Jr and his partner Kimberly Guilfoyle are said to be looking for digs in Jupiter, north of Palm Beach.

All this begs the question: What will the Trumps do once installed in Florida?

“Perhaps once they find a suitable place to settle down here, the Trumps will find a fresh outlet for their energies, as the post-presidential Jimmy Carter did with Habitat for Humanity,” said Pittman.

“There are plenty of poor folks in Florida who could use their help,” he said.

But, referencing one of the president’s more infamous moments, in which he visited Puerto Rico hurricane victims in 2017, Pittman added: “It would need to be something more substantial than just tossing them rolls of paper towels.”