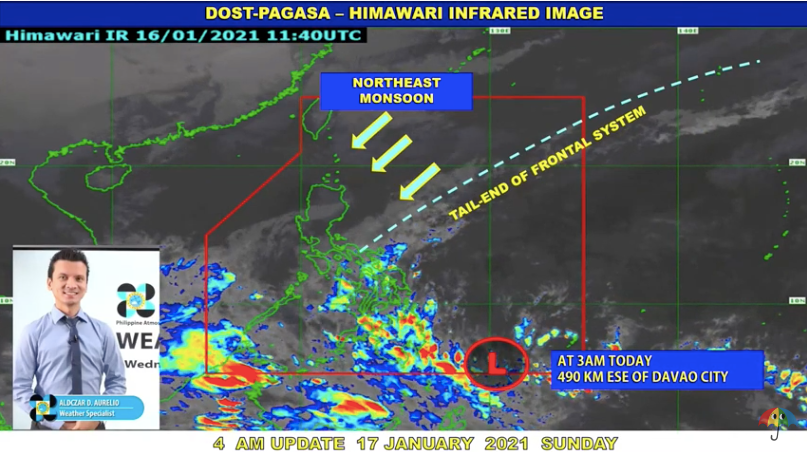 MANILA, Philippines — A low pressure area (LPA) was spotted off Mindanao and is being monitored by the Philippine Atmospheric, Geophysical and Astronomical Services Administration (Pagasa).

Pagasa weather specialist Aldczar Aurelio said the LPA is not likely to develop into a storm but its trough or extension will bring rain showers in the country’s southern region.

(Because of the trough of the LPA, the entire Mindanao will have cloudy skies with scattered rain showers and thunderstorms.)

Meanwhile, Aurelio said cooler weather, especially in the early morning hours,  is still prevailing in Luzon due to the  northeast monsoon.

Metro Manila and the rest of Luzon will experience partly cloudy to cloudy skies with isolated light rains also due to the northeast monsoon.

The tail-end of a frontal system, or the boundary where the northeast monsoon and the easterlies converge, will bring cloudy skies with scattered rain showers and thunderstorms in Bicol region, Mimaropa, Visayas, and Mindanao.

Read Next
NASA’s Boeing moon rocket set for ‘once-in-a-generation’ ground test
EDITORS' PICK
How to lose a PH genius: Wesley So officially a US citizen
Smart reinforces superiority with best speed and mobile video experience in PH
Every Filipino home can now be a smart home with realme TechLife
New 3,045 COVID-19 cases push PH total active cases to 40,074
LTO’s P500-M deal for screws draws scrutiny
Nestlé Philippines’ ‘NESCAFÉ Plan’ bags Grand Anvil at PRSP 56th Anvil Awards
MOST READ
How to lose a Filipino genius: Wesley So officially a US citizen
US lays out list of aid to ‘satisfy’ Duterte following VFA payment demand
Robredo on Sara Duterte leading poll surveys: Why are Filipinos drawn to leadership of this kind?
LTO’s P500-M deal for screws draws scrutiny
Don't miss out on the latest news and information.