CEBU CITY, Cebu, Philippines — Twelve front-line doctors were apprehended and fined on Friday evening for violating the curfew, as authorities in this city stepped up measures to keep residents in their homes, including bringing back to the streets the armored personnel carriers (APCs) manned by soldiers, to curb a resurgence of coronavirus disease cases here.

They were caught by the police drinking in an establishment in Barangay Banilad, Cebu City, past 11 p.m. or within the curfew hours when no one was supposed to be in the streets or public places.

The doctors were all front-liners who work for the different hospitals in the city.

They were all off duty and had gathered to unwind when they were caught by policemen implementing the curfew.

But since all of them were first-time offenders, the doctors were just asked by the city government to pay a fine of P500 each, said City Councilor Joel Garganera.

Based on the city’s quarantine ordinance, violators face an administrative fine of P500 for the first offense, P1,000 for the second offense, and P3,000 or 30 days imprisonment for the third offense depending on the discretion of the court.

The owner of the establishment was also ordered by City Hall to explain why they accommodated customers within the curfew hours. 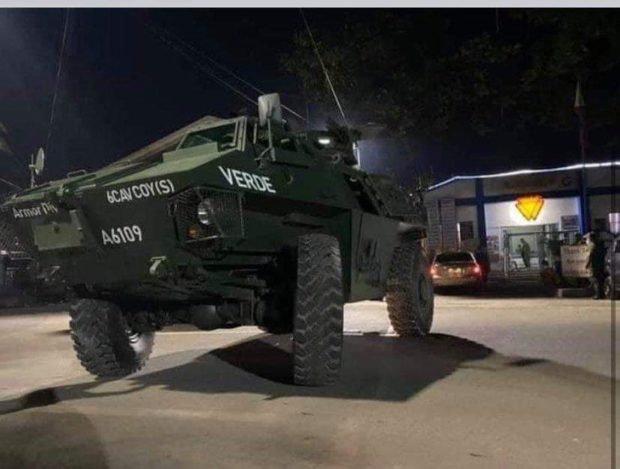 At least four APCs from the Armed Forces of the Philippines and numerous policemen were deployed on the streets of Cebu City on Friday evening to make sure people strictly follow health protocols and obey the curfew.

The APCs were first brought out on the city’s streets to contain residents in two densely populated urban villages that experienced a surge in coronavirus cases in April and May last year.

According to Garganera, deputy chief implementer of the city’s Emergency Operations Center, they needed to bring back the strict implementation of health protocols to address the new wave of COVID-19 cases here.

Law enforcers, he said, were giving special attention to Barangays Pasil, Sawang-Calero, Suba and Ermita, which were known to hold separate celebrations during the feast of Sto. Niño or the Holy Child Jesus held every third Sunday of January.

Garganera said the chiefs of the four villages were warned against allowing fiesta celebrations, otherwise they would face administrative charges for violating quarantine protocols.

Garganera urged the residents to stay indoors on Sunday, which in previous years would have brought millions of people to the streets of the city to take part in the religious celebrations at the Basilica Minore del Sto. Niño in downtown Cebu and the grand dance parade along the city’s major streets, the highlight of the Sinulog Festival.

Both the Sinulog Festival grand parade and the Masses and other religious activities at the basilica have been canceled to prevent the spread of the virus.

Devotees were instead encouraged to attend the Eucharistic celebrations through the church’s online portals.

The Department of Health in Central Visayas on Friday recorded 61 new infections, the highest since the city was placed under modified general community quarantine in September last year.

Since the start of the pandemic, Cebu City recorded a total of 11,333 cases with 699 deaths.