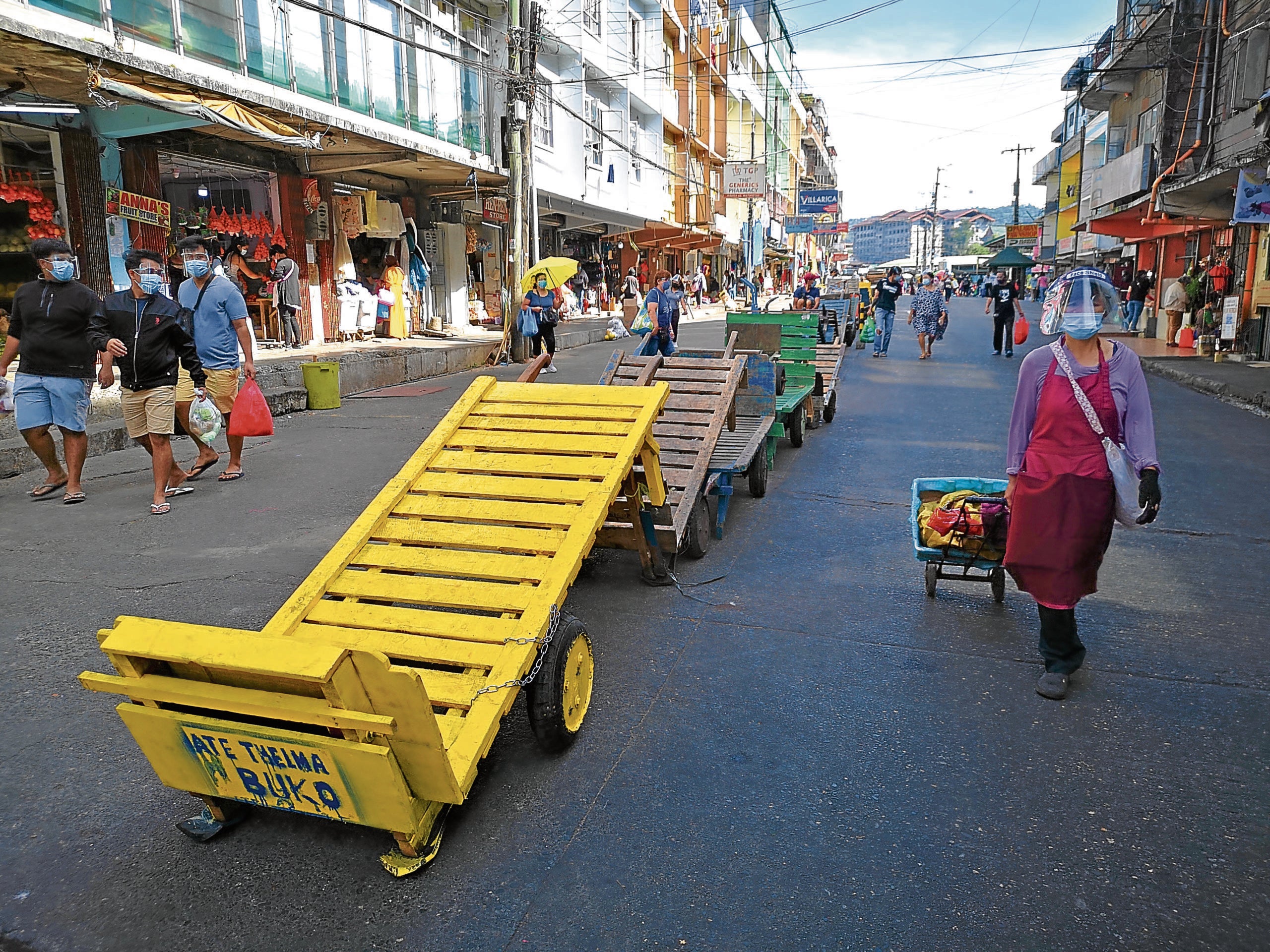 KEEP YOUR DISTANCE Despite efforts of the local government to enforce physical distancing and the wearing of face masks and face shields, Baguio City continues to deal with a surge in COVID-19 infections, which health authorities associated with travel and clan gatherings during the recent holidays. —EV ESPIRITU

BAGUIO CITY — The Cordillera region has recorded 315 new cases of the coronavirus disease on Thursday, its highest single-day spike since the pandemic began, the Department of Health (DOH) said.

The surge could be due to travel and clan gatherings during the Christmas holidays, health officials said on Friday.

Among the latest cases involved a businessman from Quezon City who tested positive for the more infectious UK strain of COVID-19 after returning to Mountain Province from Dubai in the United Arab Emirates on Jan. 7.

The most significant increase in the infections took place in Mountain Province with 84 new COVID-19 patients, followed by Baguio City with 74 new cases, and Kalinga province with 69 new patients.

Abra province, which recorded the region’s first case since the pandemic began, registered six new cases, while Apayao province has one case.

Baguio City officials said these developments may prompt a reevaluation of seasonal events that are about to be revived, such as the 2021 Flower Festival that was scuttled last year.

The rising COVID-19 cases could also require tighter controls on travel now that buses serving Baguio to Manila routes and other points in Luzon have resumed operations, the Inquirer learned.

Two Ifugao towns—Banaue and Asipulo—have closed their borders for at least fours days to allow contact-tracing efforts, according to the Philippine Information Agency.

Epidemiologists were also tracking down people who may have been exposed to 15 patients in the towns of Kiangan and Lagawe, both in Ifugao. Twelve of the patients were jail officers.

The Etag Festival in Mountain Province, held annually from Jan. 30 to Feb 4, has also been canceled as precaution against the spread of the virus.

Baguio officials were also studying the impact of the new strain and the infection surges on its economy.

As the plans for the vaccination of 190,000 Baguio residents would begin this year, the Baguio Flower Festival Foundation Inc. (BFFFI) outlined plans for a scaled-down Panagbenga this February, according to Evangeline Payno, BFFFI’s chief of staff.

The festival’s crowd-drawing street dancing and float parades had been replaced with community contests, she said.

Baguio has reopened its doors to tourism and had cleared more than 27,000 tourists after being screened from October to December last year. Among them were celebrities who have been promoting the city online.

More than 3,000 leisure travel applications have also passed screening for January and February.

In Albay province, health officials also asked residents to be more vigilant following a rise in infections particularly in Legazpi City, the regional center of the Bicol Region.

She said that among the 11 new infections, eight patients were asymptomatic. Most of them were front-liners.

In December last year, the Department of Health (DOH) launched the Bicol COVID-19 Surveillance Targeted Testing, the real-time reverse transcription polymerase chain reaction testing given for free to front-liners in the region.

Zenit also attributed the increase in cases to the people’s mobility during the Christmas and New Year holidays.As of Jan. 14, the DOH Bicol also reported three new cases in Camarines Norte, 19 in Camarines Sur, one in Masbate and eight in Sorsogon.

The region has so far recorded 3,948 cases since March last year, of which 551 remained active cases, with 166 deaths. —VINCENT CABREZA AND MA. APRIL MIER-MANJARES